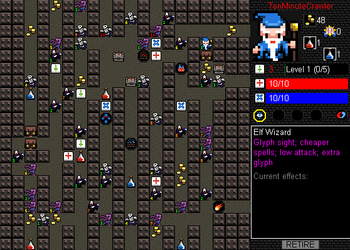 The Crypt is a side dungeon in Desktop Dungeons filled with undead monsters. It is initially locked at start but becomes available after completing the normal dungeon with all Tier 2 classes.

The dungeon is composed of zombies, wraiths, and vampires (the only dungeon this monster is found in). Like other challenge dungeons it contains two bosses instead of one, these are Tormented One and Frank the Zombie.

The Crypt Dungeon is notable for two monsters: the Wraith and the Vampire. With these two, it is geared mostly to defeat characters who depend on exploration as well as those who combine melee combat with spellcasting. Wraiths will inflict Mana Burn, meaning that characters who fight by casting spells during or after combat will only be able to kill them before leveling up, or would need to sacrifice mana potions to restore their mana regenaration. Explorer characters will constantly run into Vampires who suck out of a part of their health, setting them back a few tiles as far as their precious HP regeneration goes.

However, the weak spot lies in the low health values for both these monster types, especially when compared to the other denizen of this dungeon, the Zombie. Characters that rely solely on magic will find it very easy to destroy high-level wraiths and/or vampires to catapult up the experience table. Heavy melee characters will find similar benefit in being able to kill both types of monsters with relatively few attacks, even when considering the wraith's natural resistance to physical combat - and really have nothing to fear from mana burn thanks to not relying too much on glyphs (or not at all). As said earlier, it is characters that must utilize both melee and spellcasting who have the most difficulty here.

As to the bosses, the most troublesome boss seems to be the Tormented One, having a whopping 60% physical resistance. Again this may not matter much to heavy-melee characters, who can probably survive long enough to kill it anyway. Other characters will want to lean more heavily into the spellcasting end of the spectrum to try and damage it with fireball as much as possible before subjecting themselves to any mana burn. Frank the Zombie seems to be the less-troublesome one, and is usually "addressed" second, when the stakes are less high.

Needless to say, acquiring immunity to mana burn will instantly make this dungeon several times easier for most character classes. Similarly, characters who are free to lean towards melee combat (like various thief and priest subclasses, and obviously warriors) may prefer trying to reach Taurog's Penetration boon, which will remove The Tormented One's physical defenses (not to mention other wraiths' defenses) thus making it much easier to kill. This also means less reliance on glyphs (which Taurog dislikes anyway) so mana burn becomes less of an issue.

Conversely, characters who find it easier to lean into the spellcasting end of the spectrum may prefer worshipping the fickle Mystera Annur to improve their fireballs, thus working around the physical resistance problem from a different direction.

Naturally, you will want to avoid worshipping Dracul entirely, as he dislikes the killing of undead monsters (and all monsters in this dungeon are undead). The Glowing Guardian, on the other hand, approves the destruction of the undead, and may prove useful for character who do not wish to worship the strictly melee/spell gods mentioned above.

Finally, if your shops have been upgraded sufficiently you may want to look for the Fire Heart item, which restores 10 health after killing any of the monsters in this dungeon. This is a terrific item for any character.

Upon clearing the Crypt with the Assassin the special Vampire class will be available. Any other class that clears the Crypt unlocks the goblin race.

Each time this dungeon is cleared by a new class the hero's gold capacity will permanently increase by 5 gold. As there are 18 classes this stands to increase the gold capacity from 70 to 160.