This is a sample Gorgon Purist run of the Hard dungeon Labyrinth.

The Gorgon is a challenging class who plays somewhat similarly to a Monk. Her primary advantages are her Poison Strike and starting 25% physical resists. Her drawbacks are that she has -50% damage and turns any non-boss enemy she kills into a wall. Her conversion ability is Death Gaze, which functions like an extra attack when hitting a monster below her threshold.

The Gorgon's initial strategy is to search the dungeon until she finds a level 2, 3, or 4 monster, preferably one that does physical damage. As she goes she should use her mana to destroy walls. This lets her build up temporary resistances with Stone Skin and reduces the chance of getting trapped in later.

So I began exploring and luck upon BYSEPPS! This is a great glyph for the Gorgon since it offsets her penalty. You'll notice then when I use it my level 1 attack jumps from 2 to 4. 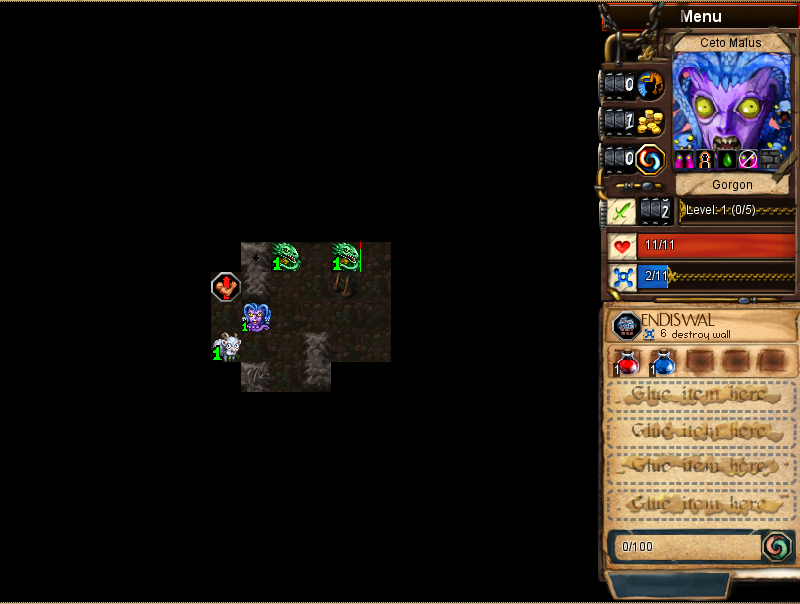 And there's the monster I want to kill. Gorgons are usually fairly easy to kill, so I shouldn't have any trouble taking it out. Plus, player Gorgons are immune to their Death Gaze. Also, take note of the black sparkles on those walls above. That means Pactmaker is nearby. Pactmaker is always a great find since you can worship him and another deity at the same time.

The trick to fighting a monster with a Gorgon is to hit it, let it stay poisoned, and then explore to heal yourself. Once you can survive another hit, repeat. 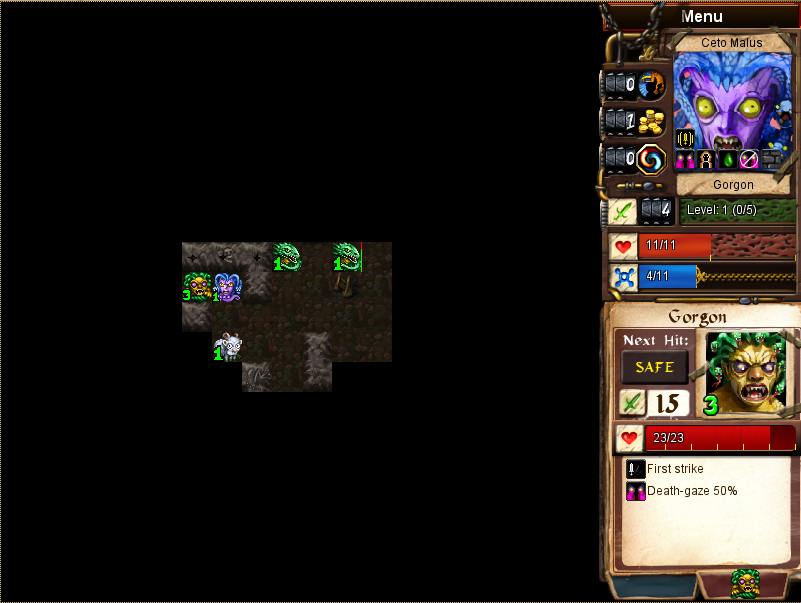 The level 3 Gorgon is dead, which has raised me to level 2. I've also cleared out the walls near Pactmaker and found HALPMEH and a level 3 Snake. Since HALPMEH cures poison, I can regen fight it. This will put me at 9/10 in level 2, letting me still get extra bonus experience from the next thing I kill. 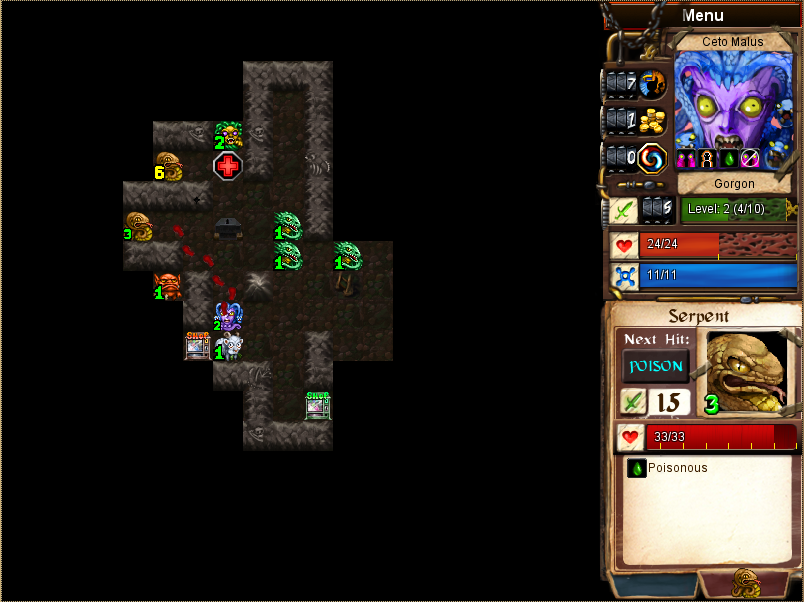 Take a look at the combat prediction here. I'm not taking any damage. This is because the Snake is below the Death Gaze threshold. When Death Gaze triggers it deals damage equal to your base attack before any other calculations. 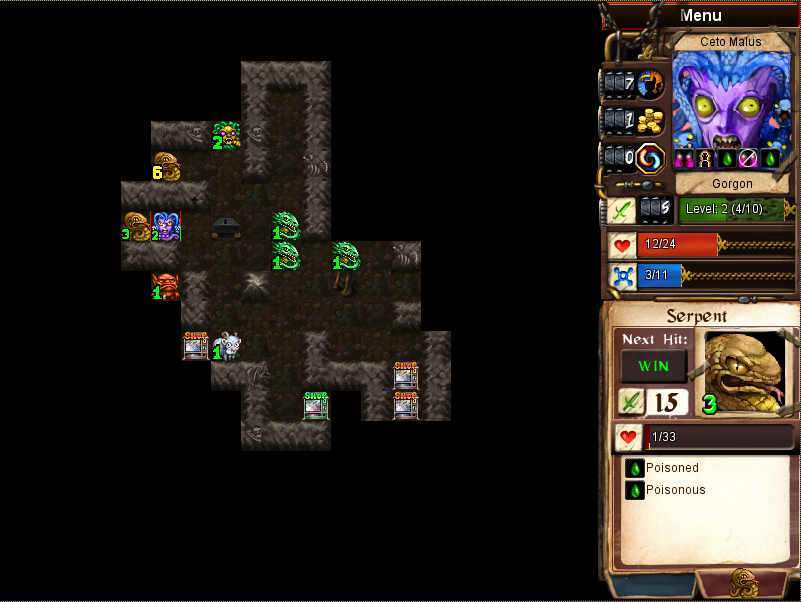 Binlor! Binlor is a great choice for a Gorgon since she destroys walls. There's also a great trick for Binlor as a Gorgon. When you worship him, he spawns a copy of ENDISWAL. Now the copy that spawns isn't worth any conversion points, but the one you already have is. So you want to convert the one you started with and pick up the new one. 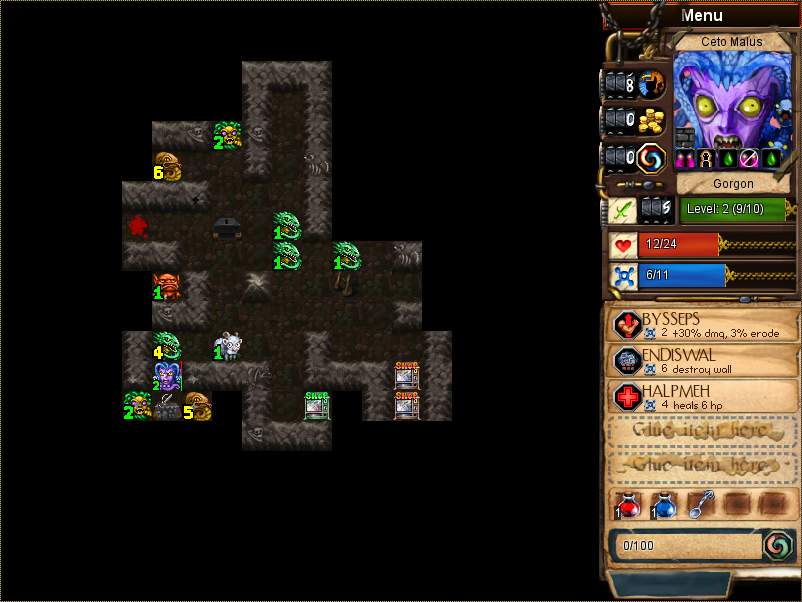 After worshiping Binlor, I pick up Body Pact from Pactmaker. Body Pact is an amazing boon that provides you physical and magic resists when a monster hits you for the first time. I've also run around destroying a few walls so I can take Stone Form. Stone Form is another way of getting Might, so I can convert BYSEPPS. 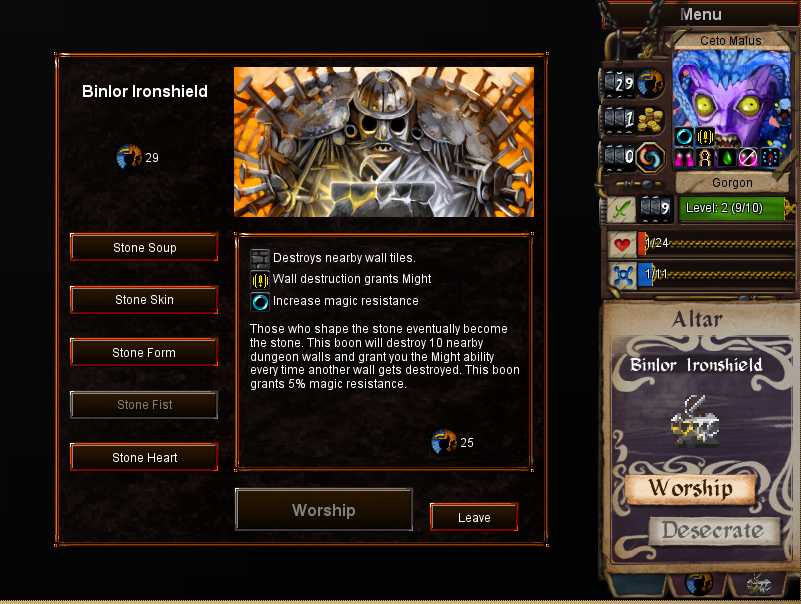 Let's skip ahead. I've killed a few more Snakes to level up. I've also killed the low level Gorgons and Goblins since their first strike can be problematic later on. Plus, First Strike guarantees we get hit and trigger Body Pact. Now I've started killing the level 7 Goblins. You'll also notice I've purchased a Rock Heart. It lets me destroy walls for an effective 4 mana and get my 20% resistances and Might buffs. 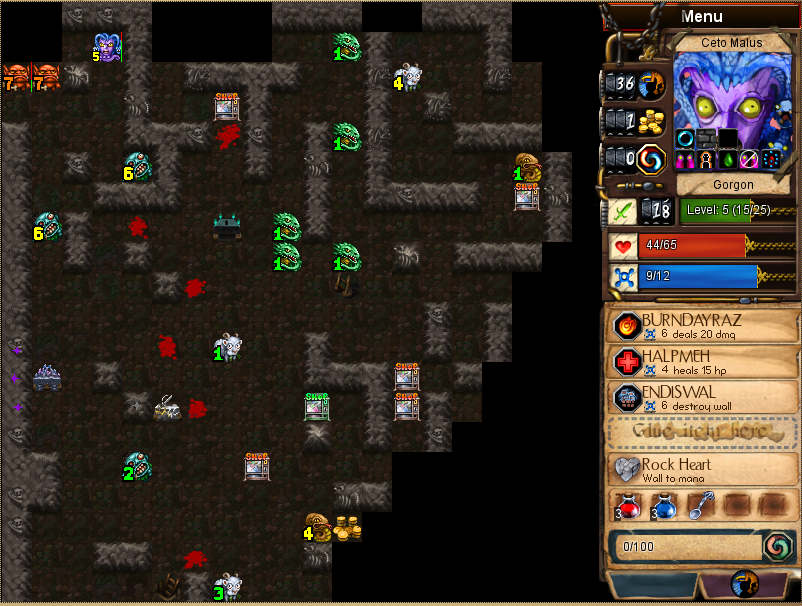 Now I grab Stone Fist from Binlor and I have all the boons I want from Binlor. So I convert to Mystera, since she's less stingy with piety which will let me use Body Pact more. If I'm lucky I'll also be able to save up for Mystic Balance (spoiler alert - I won't be that lucky). 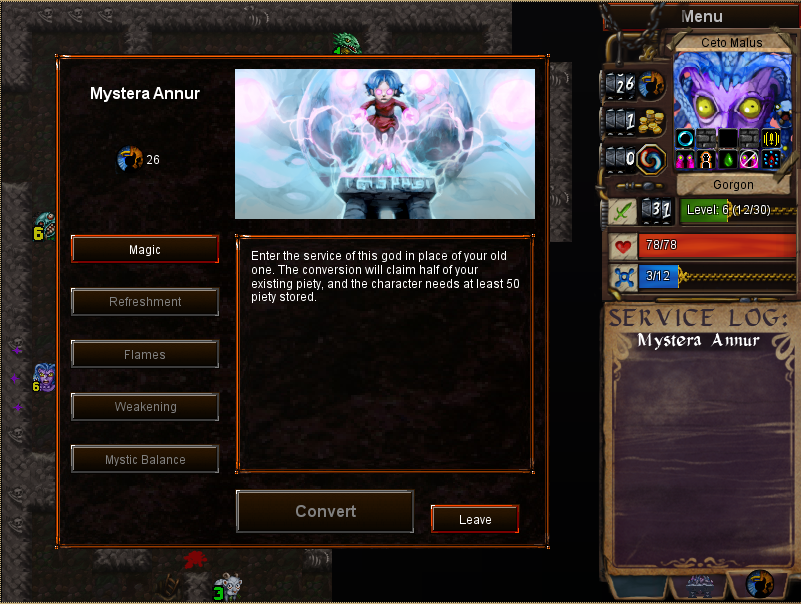 I've begun to regen fight the primary boss, Rex, and I've located the secondary boss, Frank the Zombie. I'm not happy to find Frank, since he's one of the higher health bosses. He's also undead and therefore immune to poison. 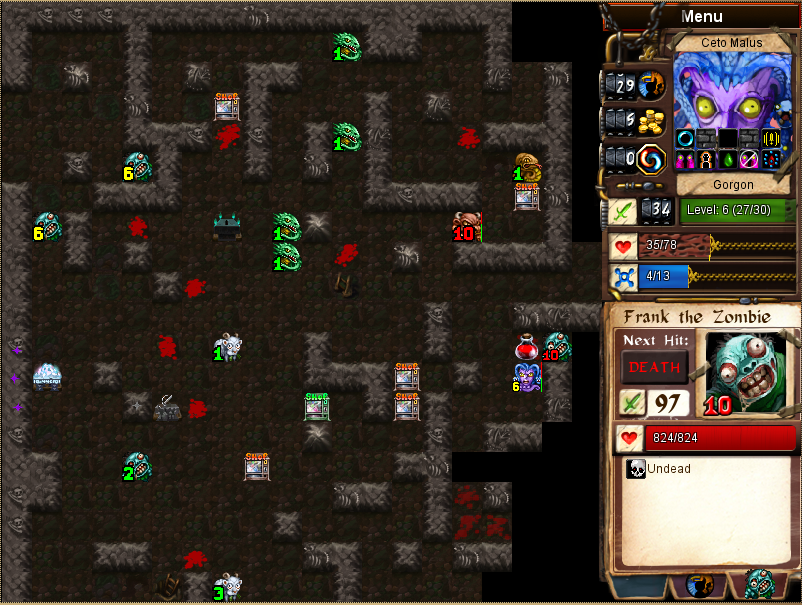 I've managed to kill Rex without using any potions. He's also provided me with a nice large drop of gold that I can use to buy something. 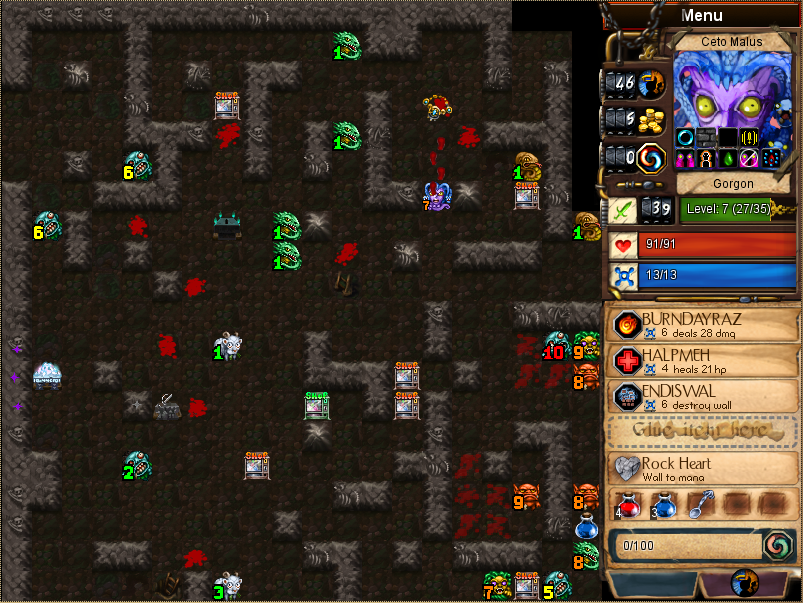 And I use that gold to buy a Schadenfreude Potion and a Whurrgarbl. The former will provide me with enough mana for two Fireballs, while the latter will augment my weak melee attack.

Now I'm going to try and kill the level 7 and 9 Gorgons to get up to level 8. 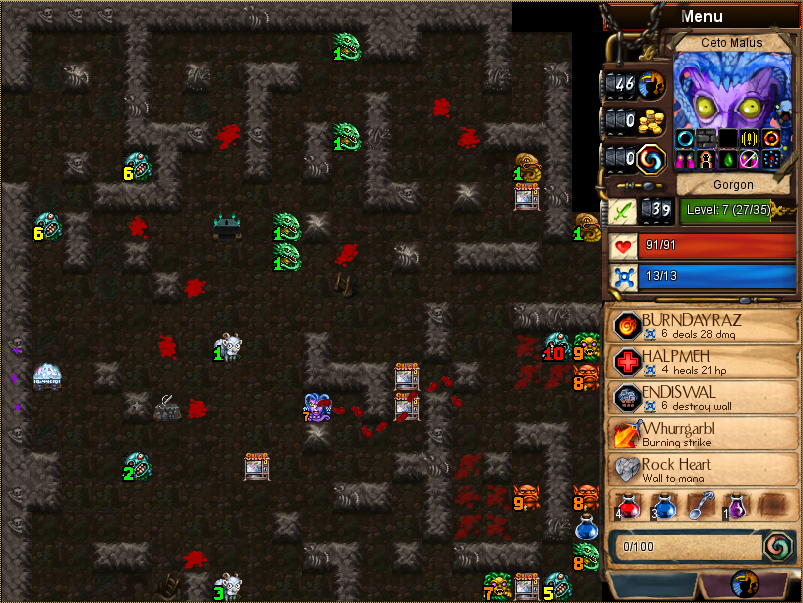 Killing those Gorgons has used up the rest of my exploration space. I've also killed most of the smaller monsters to boost my resistances with Body Pact and get prepared for a mid-fight level up against Frank. Except I'm short. Now I have to make a choice. I can either kill the two level 6 Zombies to reach level 9 or kill the level 8 Goblin and hope that the subdungeon contains a monster. The most common sub-dungeons contain a level 5 monster, which would be just enough. 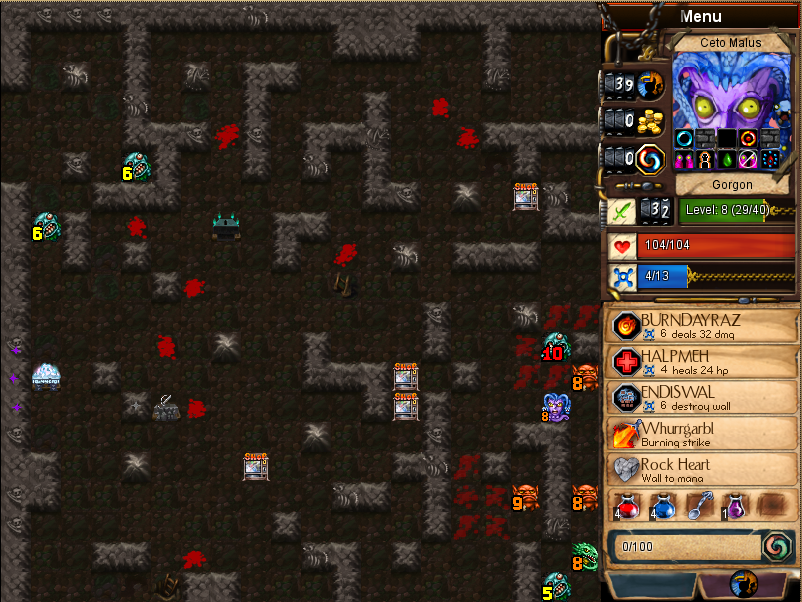 And success! I've knocked him low enough that the next time I damage a monster, the stacks of burning on him will ignite, killing him and fully healing me. 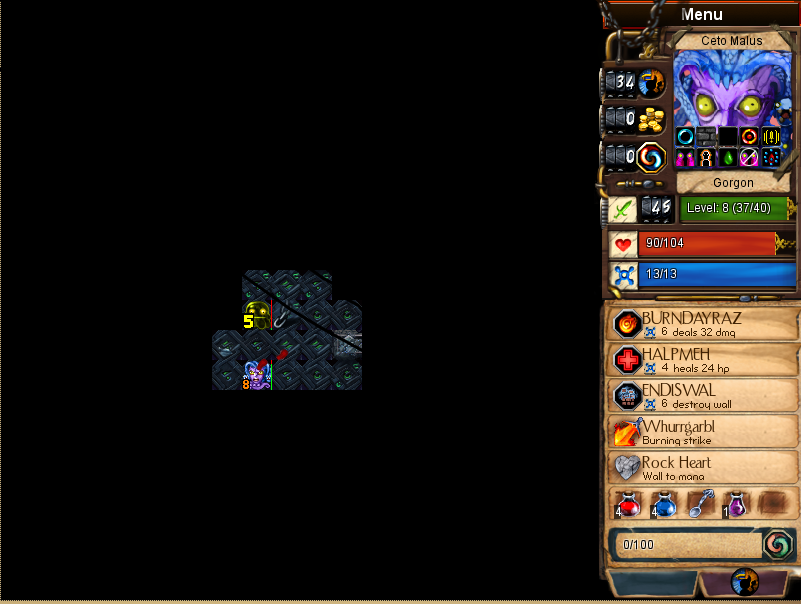 I began fighting Frank, using up all my mana first. Now that I'm out of mana, I can safely convert my Fireball and HALPMEH. I keep ENDISWAL since it isn't worth any conversion points. I've also positioned Frank so that I can knock him through those three walls using Stone First and triggering Stone Form. 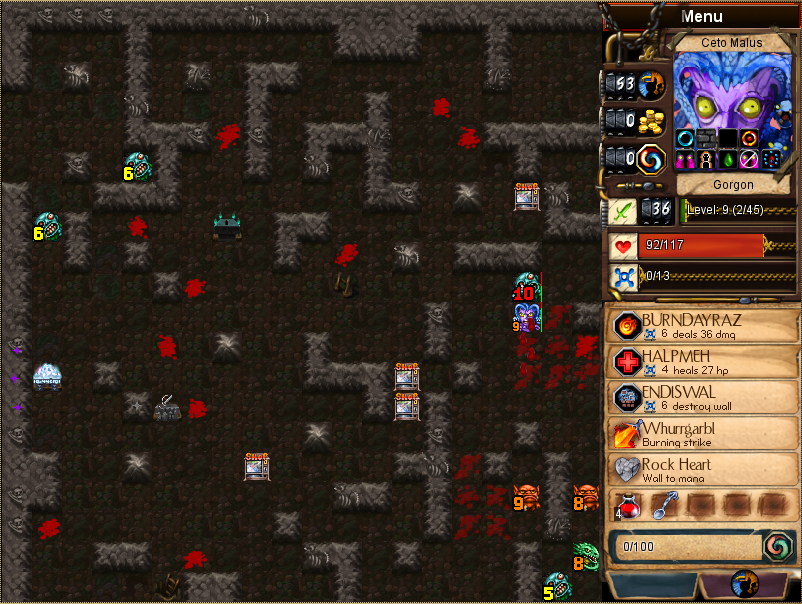 "Wait!?", you might ask. "How are you doing that much damage to Frank?". Death Gaze! Unlike in the Alpha, and as mentioned earlier, Death Gaze is no longer an instant kill. Against a normal enemy it'll kill it outright, but against a boss it frequently won't. In this case it isn't quite enough to kill Frank. But the next one will be. 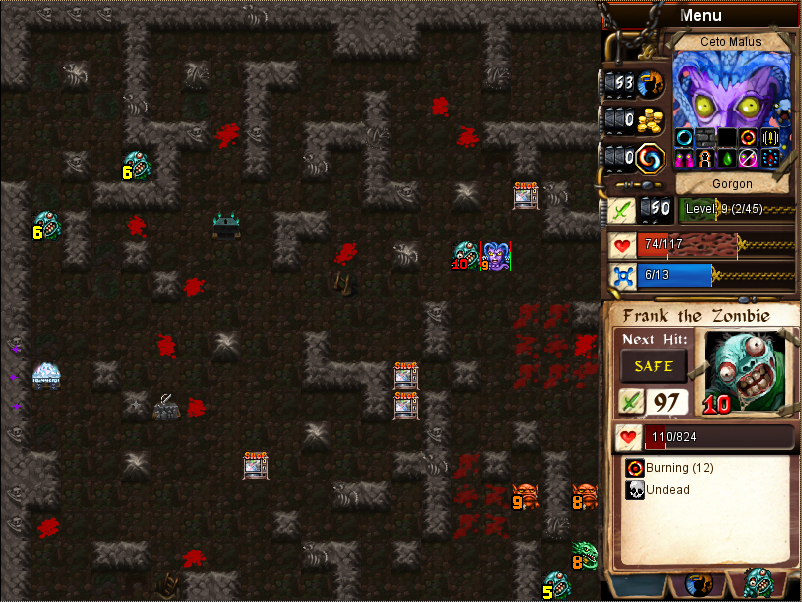 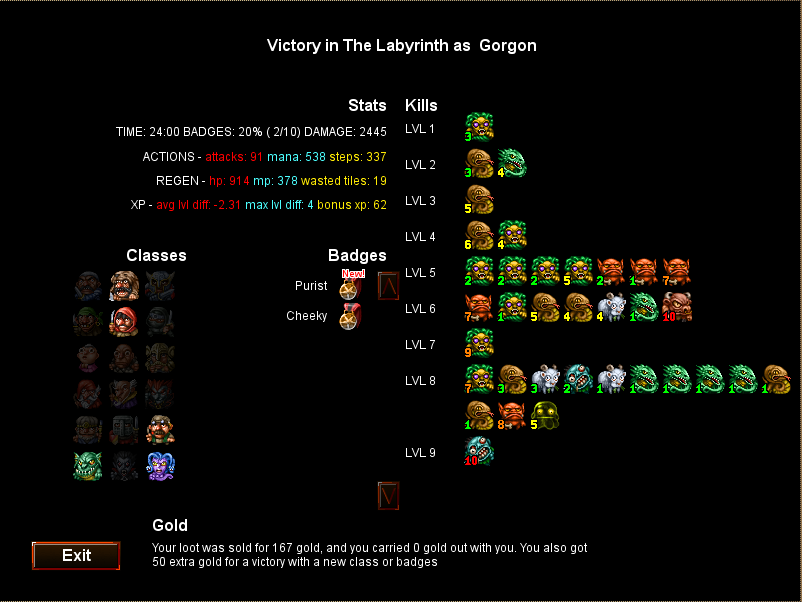