The Adventures of Yeoman Johnson, Episode 4: The Wizard by OrigamiGuy

Wizards are, of course, natural candidates for high magic use. Their -25% to attack makes melee attacking tricky, and their reliance on magic limits their choice of god worship. On the other hand, the -1 spell cost makes them potentially more effective than any other class when it comes to spell-friendly gods.

Wizards need either more mana or more mana potions; Gnome or Elf is the way to go here. I'll go with Elf, to allow for more fireballs per recharge. Here we go!

I get one false start, trapped by mid-level baddies with no glyphs in range but IMAWAL, which is about as helpful as Dracul's altar in the Crypt when you're boxed in. I grab what little gold there is to have, retire, and start again.

MUCH better. Exploring out to the edges of the enemy formation gives me ENDISWAL, BURNDAYRAZ, PISORF, The Pactmaker's altar, and two mana-ups, as well as other random goodies. Binlor's altar is also here, but we'll ignore that. PISORF gets converted immediately, since we're definitely not going to worship a god that grants piety for destroying glyphs. This dungeon is also ruled over by Lord Gobb, once again. 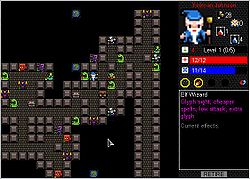 Much better start than the first time.

I'm going to branch out a little further here, to get a little more mileage out of TP's initial piety boost. Also, it'll give a chance to see if the third altar, by a longshot, is Mystera (which might be a little better than TP at this point). ENDISWAL clears the path to BYSSEPS, a.k.a. 2 more mana points.

Two more walls down, and the last two glyphs are mine: WONAFYT and WEYTWUT. Four more mana for me, then. The last altar is Glowing Guardian, so looks like it's The Pactmaker this round. I knock down some more walls to get more area explored, then go worship.

Not bad; looks like 31 piety for my signing bonus, which means at 20 piety per level I'll be able to afford Learning by level 2.

Killing Monsters for Fun and Profit

A lv2 Gorgon, followed by a lv1 Wraith is enough for clvl 2. The piety bonus is enough to buy me the Learning boon. With 21 mana, that's four fireballs at 8 damage apiece, getting me 32 damage for free. That lv4 Warlock in the corner looks like a likely target; he's got 35HP, just enough to finish him off with a stab to the face and level up in the process.

At clvl 3, four burns is 48 damage, taking care of a lv6 Gorgon. That's clvl 4, and 64 damage for free. That plus our 21 points of melee will more than end a lv7 Warlock on the northwest edge. Clvl 5, and 80 damage. The lv9 Gorgon goes down in the exact same manner, and now we're clvl 6 with enough piety to buy the Mana boon.

We've got more than enough oomph to take out the boss now. Four 'balls takes him down to 210/286 HP; seems I forgot about his 20% Magic Resistance. Oh well. Our experience catapult left enough lowbies to easily level up to clvl 7 for the refill, even with the Wizard's horrible melee. I manage to level up just by killing the remaining lv1 monsters (thank you, Learning!).

Now that the extra mana from my boon earlier has been refilled, I get six free shots. Gobb's now at 88/286 HP, and his armor is looking a little singed. The remaining lv2's, 3's, and two 4's are enough to get clvl 8. With the mana refill and increased damage, four more fireballs is good for the win. Victory!

We've now got access to more shop stuff, the Sorceror class, and a new enemy: the mighty Goat. Until next time, when I tackle the Tier 2 classes, starting with the Berserker! 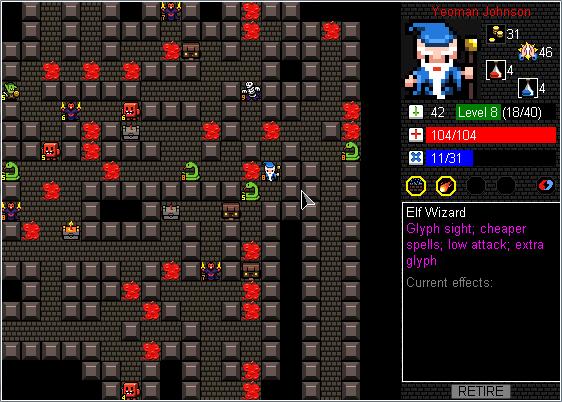 The Pactmaker can be ultimately broken if he's used correctly: Once I saw the altar, I decided to get as much dungeon explored as I could. Before I even killed my first enemy I had every enemy tile revealed, every item in the dungeon, and less than five squares I could uncover after kills without using ENDISWAL again. While most times it's better to save as much unexplored area as possible, TP allows for the alternate strategy of mapping out the entire region for the starting bonus and using the information to plan out your entire battle strategy free of surprises.

The Elf Wizard has a double opportunity for being an unmerciful killing machine, since the extra mana from converting glyphs plays so well with the reduced cost of spells, and the Wizard's other ability makes more glyphs to convert. Even without boosts, however, it's possible to throw two fireballs from the get-go, a HUGE advantage in the early game.

Combine this with the starting piety boost from exploring everything before TP worship, thus allowing Learning at clvl 2 and Mana at clvl 6, instead of one level earlier for each. I was so grossly overpowered by the end (Note that it was never even necessary to quaff a potion) that it was almost impossible to play normally and NOT beat the boss. Just for curiosity, I stuck around after the boss fight and killed off the remaining monsters. I ended up at clvl 10 with no help from potions either, and with 27 XP worth of remaining bad guys. Also possible and unnecessary was being able to take the Health boon at clvl 10.

You've got something to say. You know you do. So put it here.

I have never seen such amazingly, destructive work from a low-unlock wizard. I've never been too good with him, but to say the least you have, infact, broken the game on this run... Amazing.