People often see vicious dungeons as above and beyond. Yes, they are much tougher, but with the right strategy and planning anyone can win a vicious dungeon. The object of my mini-series of annotated playthroughs is to prove to you that you can beat vicious, no matter who you are. I plan to prove this by going through and beating every vicious dungeon with a human fighter. The reason is with a fighter, you have to have a good strategy and know little tricks to make dungeons easier, as they themselves have very little leverage. I do not recommend you do this. One last important note: to beat most vicious, you will need top notch preparations. Make sure you have upgraded all of your buildings as high as you can.

In the third part of this collection we will look at Namtar's Lair. This dungeon is mean. It has very little exploration space, and a horde of monsters that make you waste blackspace by having blink cowardly or lifesteal. The monsters who don't waste your blackspace are fairly bad by themselves. On top of that, this has one of the hardest bosses in the game. At least one form is almost always bad against you, and there are six whole forms! Still, no matter how daunting, every dungeon is beatable. We'll start off by looking at my preparations. 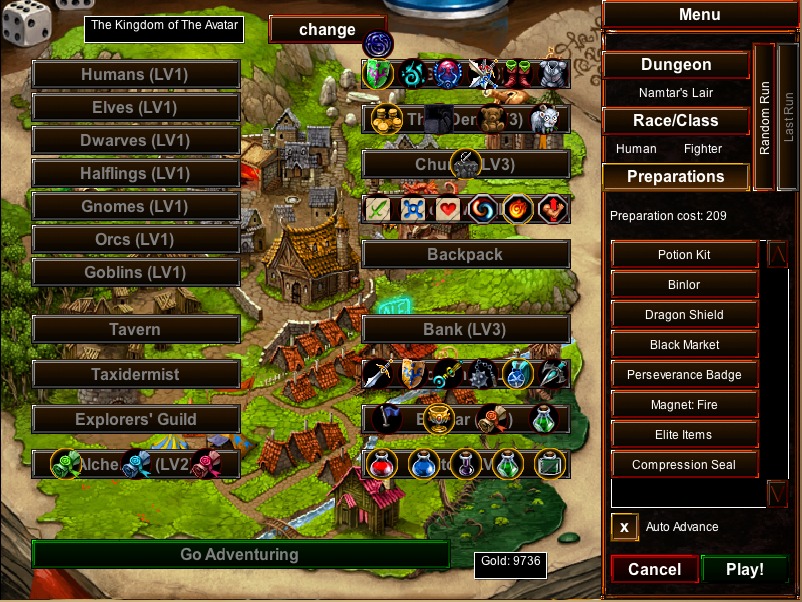 Dragon Shield: This is probably the greatest all-round preparation in the game. This is especially great for Namtar, as he hits for very large amounts of magic damage.
Black Market: This is more of a personal preference. Still, it helps because I'm preparing elite items.
Binlor: I want him early for immediate magic resistance at level one, more blackspace, and good piety to convert off.
Magnet: Fireball: This is essential for classes that need leverage early, and the fighter needs leverage as fast as he can get it.
Perseverance Badge: A great prep that gives more damage and takes up little room.
Elite Items: It would be great if I could get more magic resistance with the elven boots, but I won't complain about any of the items.
Potion Kit: Health and Mana Potions are always useful. Whupaz is essential for every vicious dungeon. Reflex is always helpful, especially for taking out his debuffing form fast. Fortitude is for getting rid of the weakening he gives you.
Compression Seal: Between Namtar's Corpse and other items, I'll need as much space as I can get. 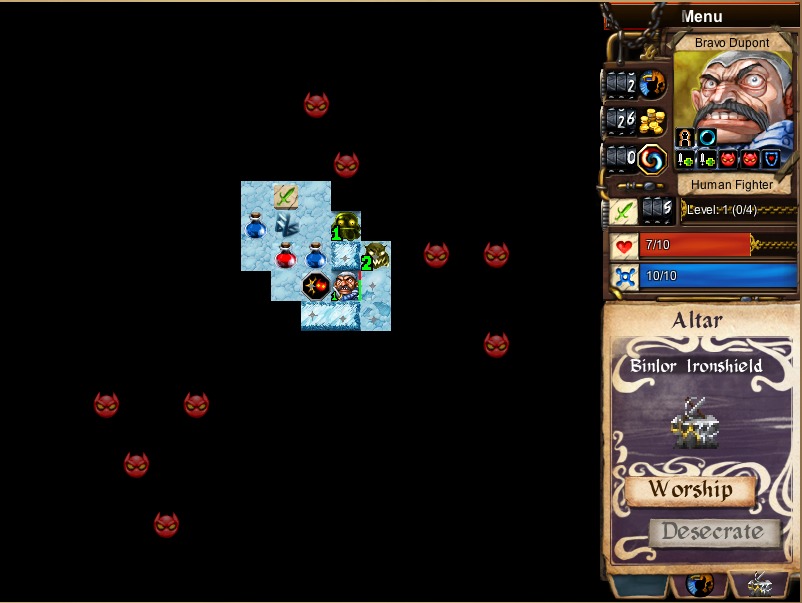 The first thing I'll do is worship Binlor. Use PISORF to get 35 piety and take stone soup. Proceed to use ENDISWAL to rack up 100 piety. Then blow it all on stone skin. Keep racking up piety and using stone skin until you have a good amount of magic resistance. Finally, rack up 50-100 piety to convert out. Do not kill anything during this period. 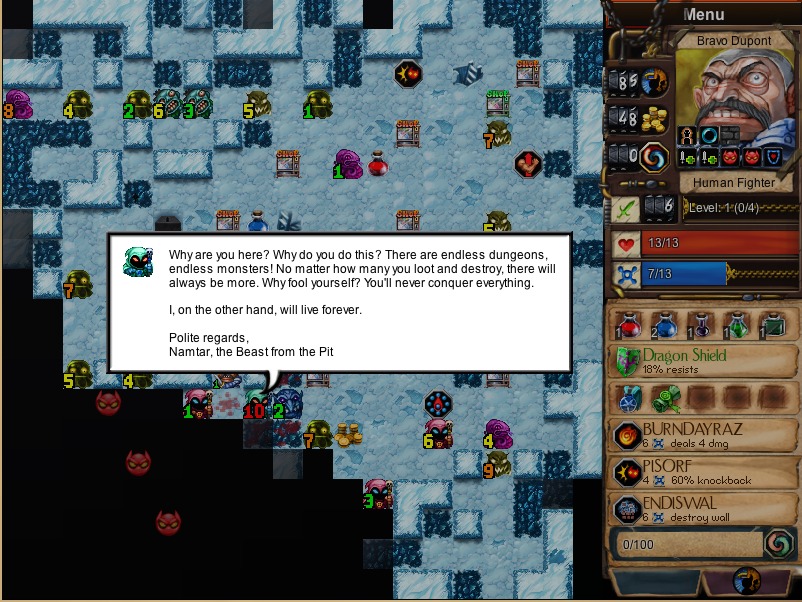 Our adversary speaks! Whatever. I'm going to keep racking up piety and ignore him. 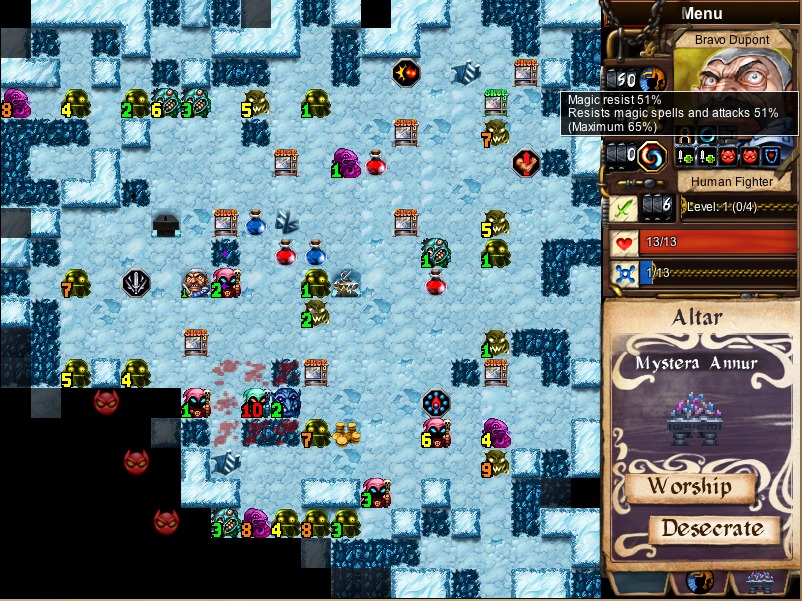 This is unfortunate. I was really hoping to convert into the Glowing Guardian or Dracul. They both give healing and magic resistance, two huge things in this dungeon. You may want to scum for one of them if it is your first time. The only thing I want from Mystera is two mana, so that I can pull off a two fireball and GETINDARE combo. Note that I have gotten 51% magic resistance, 33% of which are from Binlor. 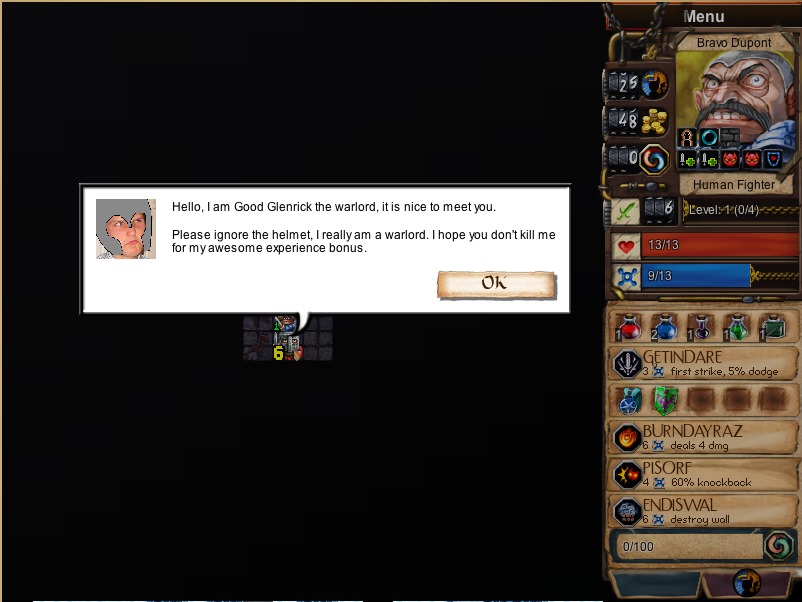 Here's my secret subdungeon. This is great, because it gets me past the earliest levels, which are quite difficult for the fighter. My normal subdungeon just had some gold and a sign. I'll talk about the third subdungeon a little later. 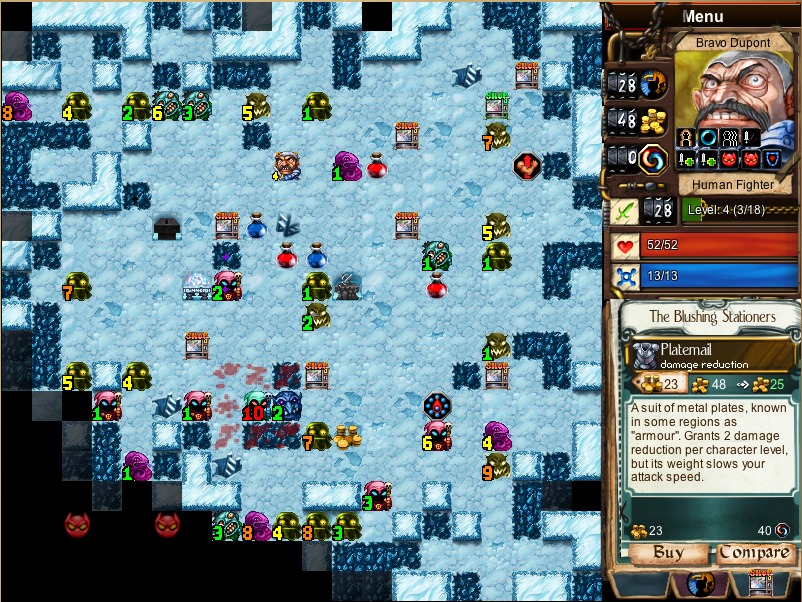 Platemail is a good item. I decide to pick it up and take out that level six warlock. 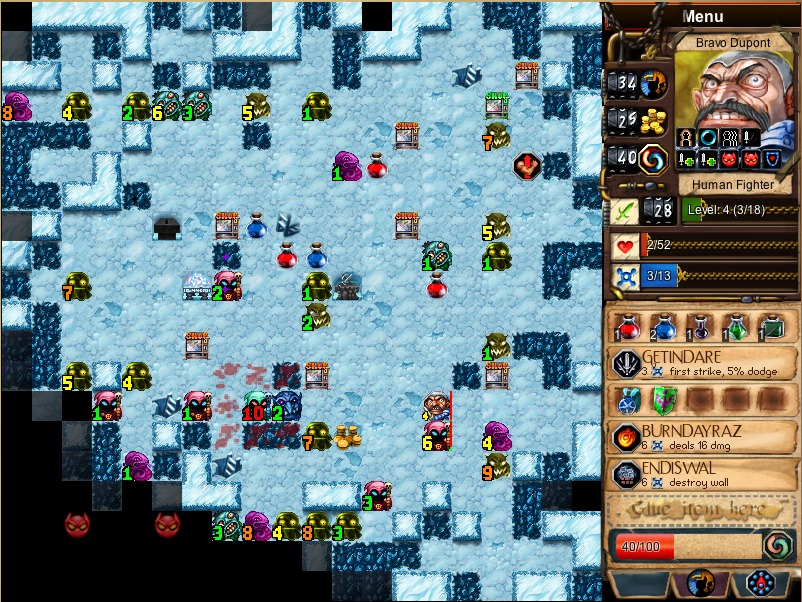 I made an unfortunate mistake here. I forgot that I can't use GETINDARE, so I had to convert the platemail to kill the warlock. 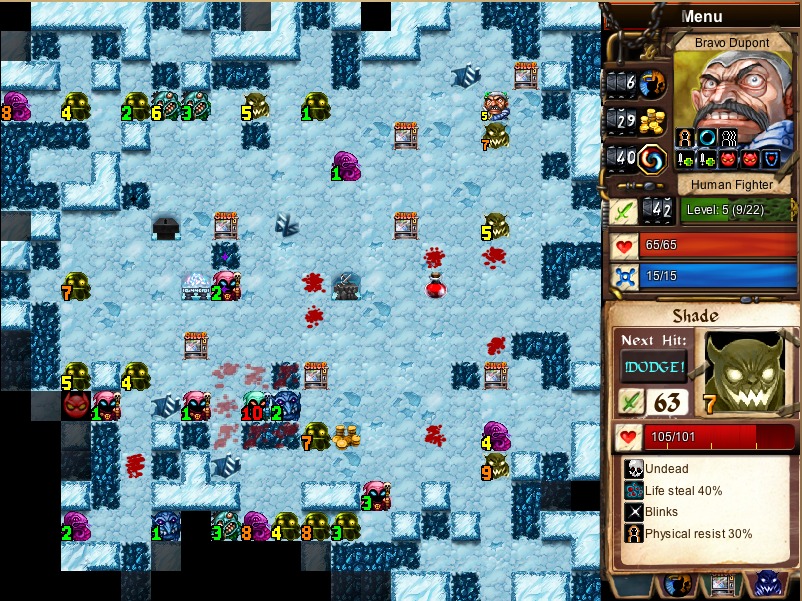 I picked off a few level ones and now it's time to kill this shade. I got two mana from Mystera, so I can dodge, fireball twice and first strike. I also remembered to convert all of the extra glyphs. 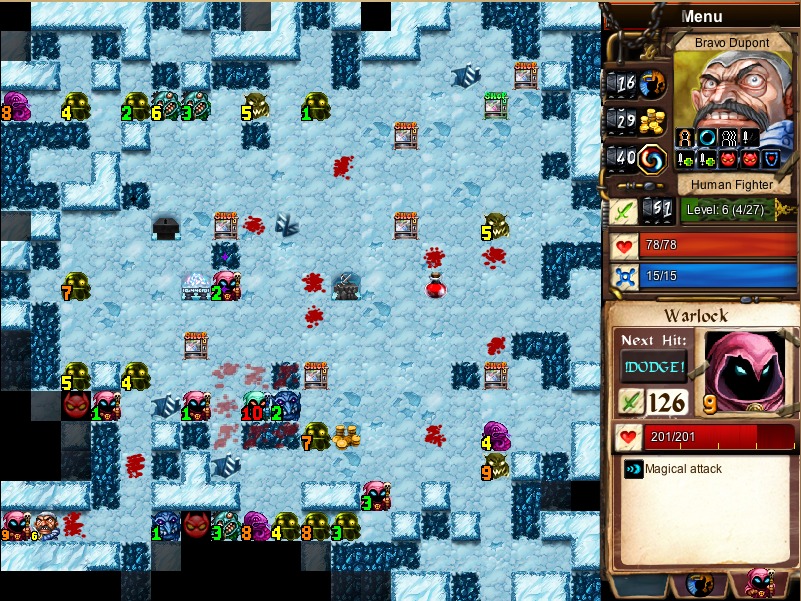 Now I'll take out this warlock with the same method that I used on the shade: dodge, fireball twice and first strike. 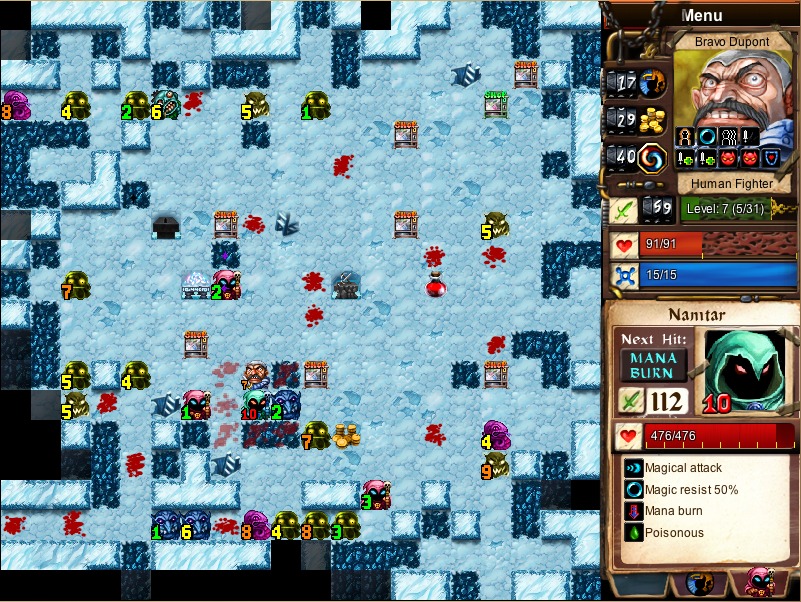 Time to fight Namtar. This is a bit earlier than I would have liked, but I was running out of resources. To take him out I had to use most of my potions and a mid-fight level up. It was pretty bad. You would normally use divine healing, like bloodswells, but that wasn't an option for me. 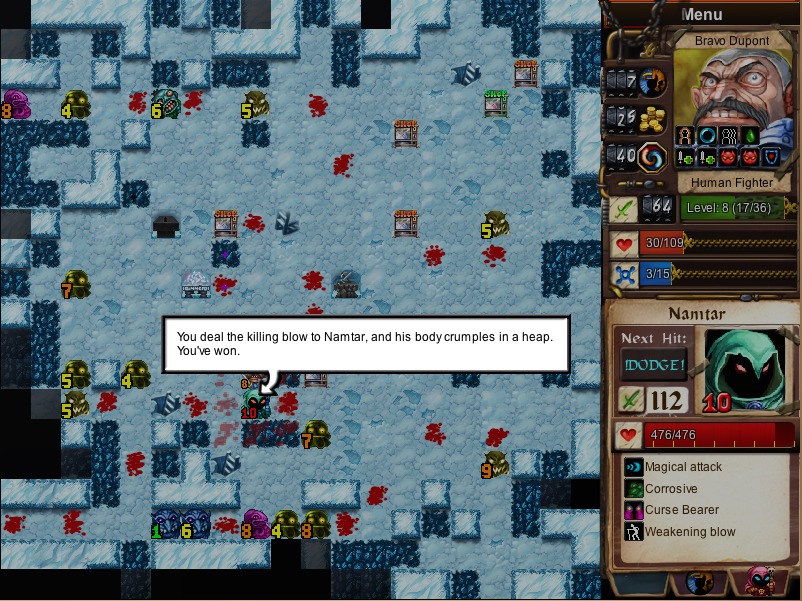 Round two! I don't even have blackspace to regenerate between forms. How unfortunate. To avoid his three awful debuffs you should use Whupaz and Reflex on this form. As long as you don't rack up more than four stacks of curse you won't need popcorn to get rid of it. 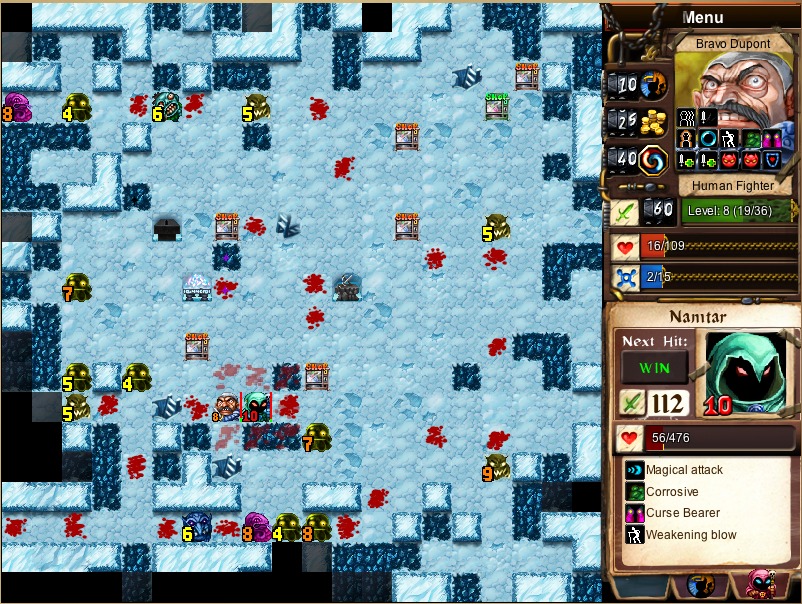 Ta da! Namtar leaves behind three things: his corpse, two large gold piles and a pool of corrosion. Go ahead and pick up the gold. Buy out a bunch of stuff. You don't need to cure your corrosion, but if you have extra cash you might as well. Try to get within eight exp from leveling, so you can get a mid-fight level up against Namtar form three. 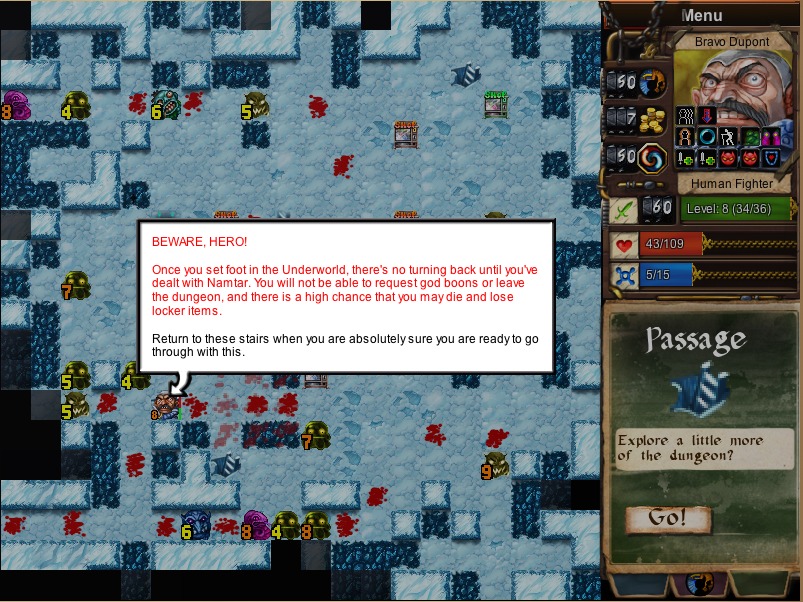 The Underworld consists of four floors. On each floor Namtar revives to fight you, with increasingly worse stats. Each time you kill him it takes a toll on your stats. The toll gets worse every floor. The first three floors are 5x15 hallways with walls on both sides. They each have three imps. Floor one has a level one, three and four imp. Floor two has a level three, five and six imp. Floor three has a level five, seven and eight imp. The fourth floor is a 5x5 room with only five open spaces in the shape of a cross. You may not exit the Underworld. 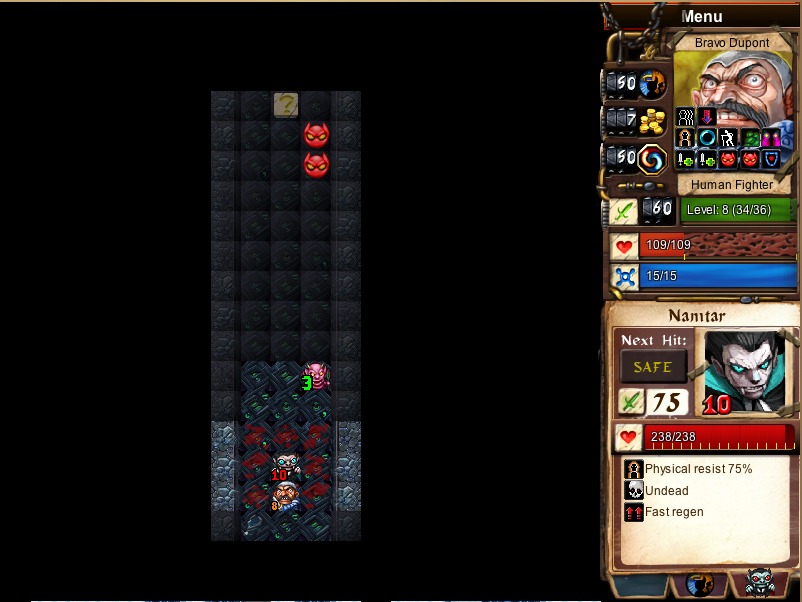 And it begins! For this guy just use BURNDAYRAZ to fireball him to death. Use your mana potions, a schadenfreude (if you bought it), and a mid-fight level up (if you set it up). 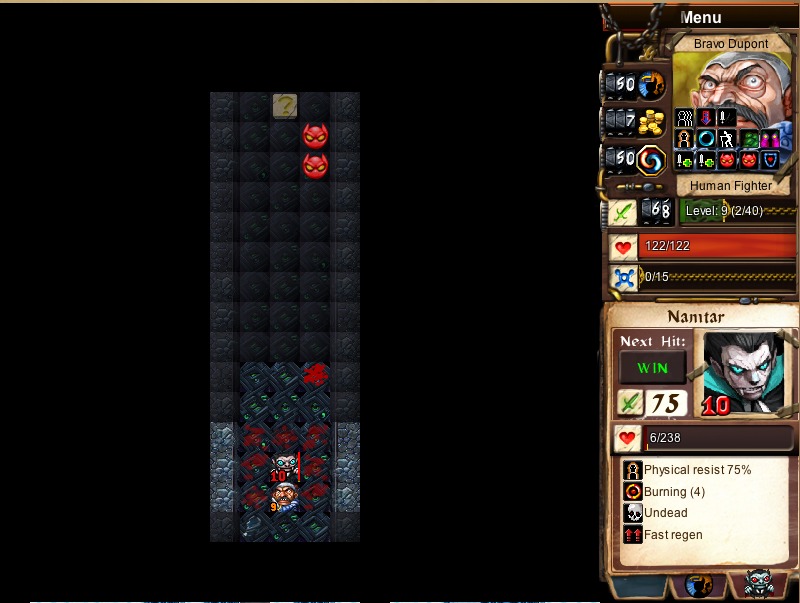 I win. Since you shouldn't be attacking this form use him and his imps to get rid of your curse stacks. 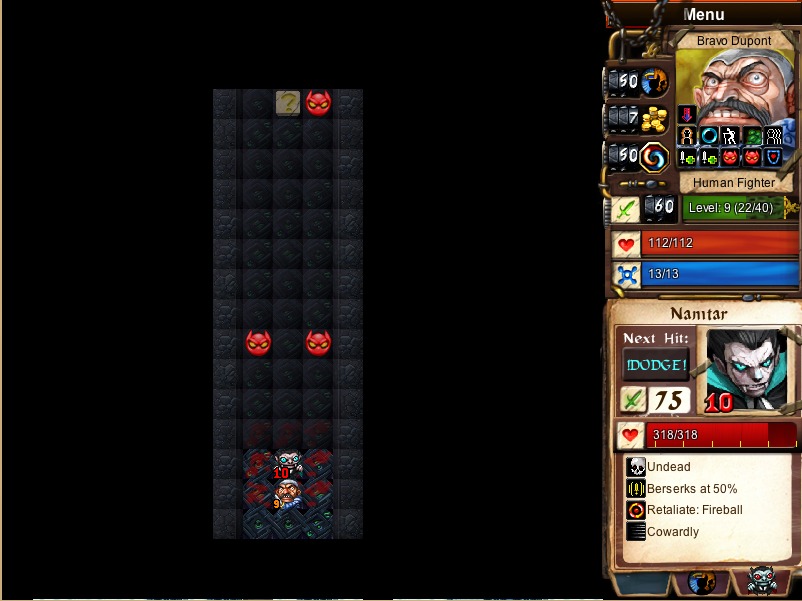 This is probably the hardest of his Underworld forms. He can deal considerable damage, and with your newly lowered health it will be tough to survive too many hits. And I happened to be out of health potions. Fortunately I picked up an Amulet of Yendor so I used a mid-fight level up to finish him. You should use your death protection for this form. Remember that you can finish off a Retaliate: Fireball monster with a fireball. 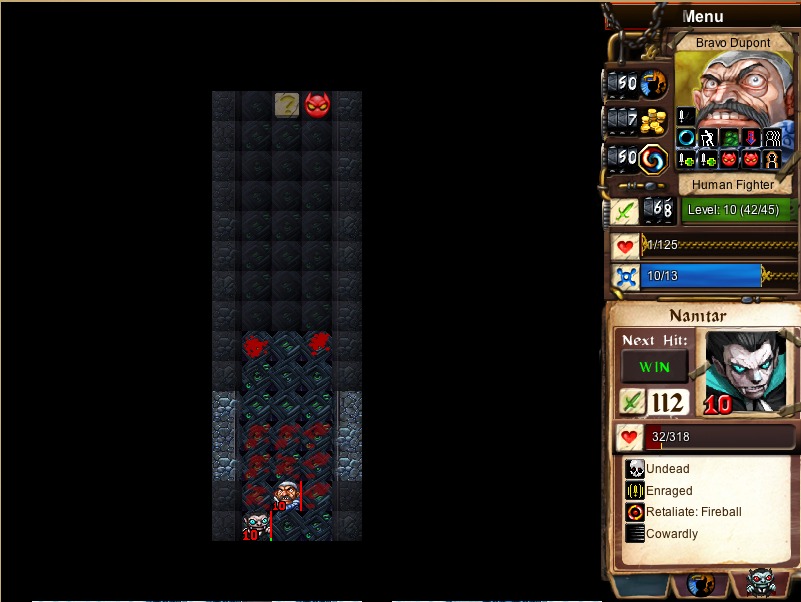 Whew, that was tough. I don't have any potions or possible level ups for the third form... 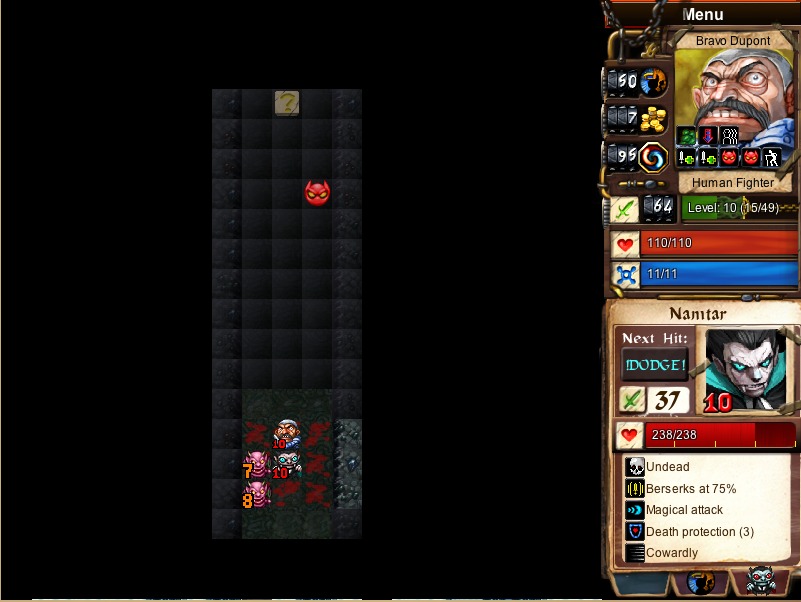 ..Who isn't too tough. While it may not look like I have any chance, if you use burning and regen-fighting it will work. It's kind of funny that a basic early game tactic works so late in the game... 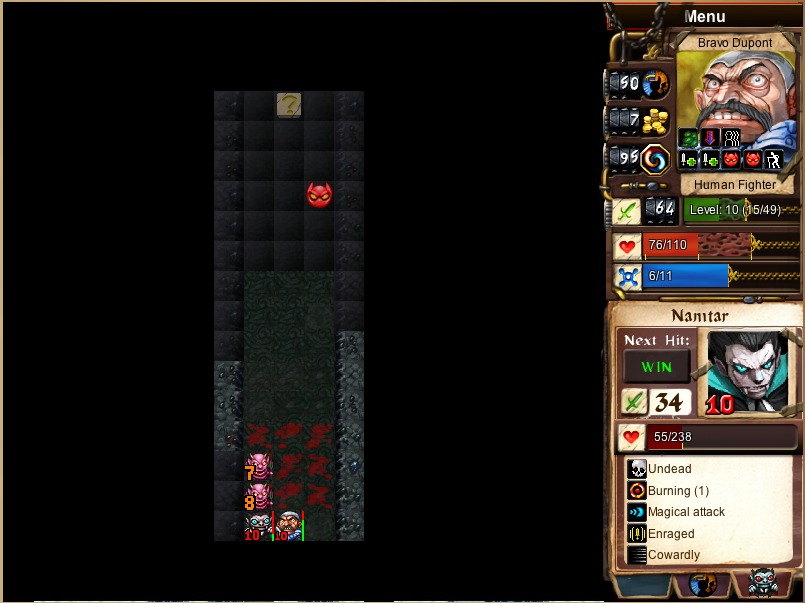 He's finished. It's almost over. I will kill this guy if it is the last thing my fighter does. 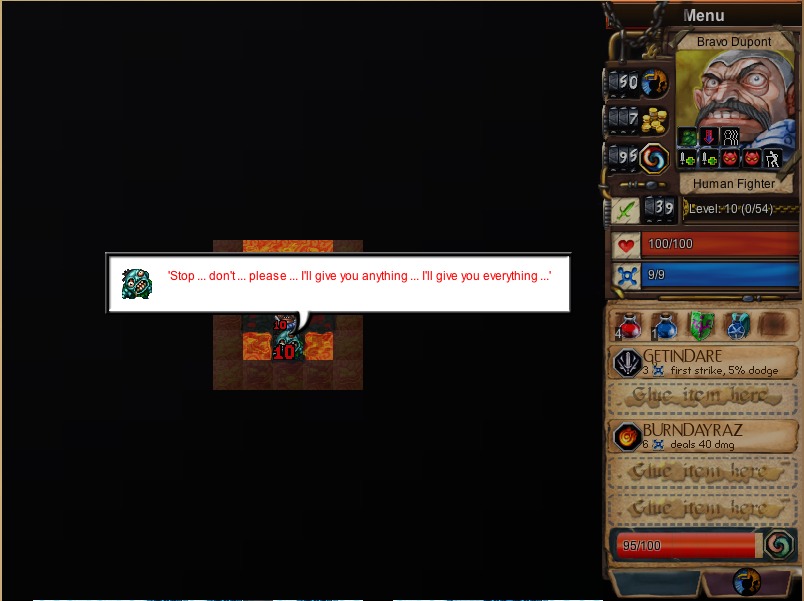 This form is a joke. It has 79 hp and does one damage. I've never heard of anyone losing to it.

Sure, like I believe that promise. Enjoy the pit, Namtar. You won't be leaving any time soon. 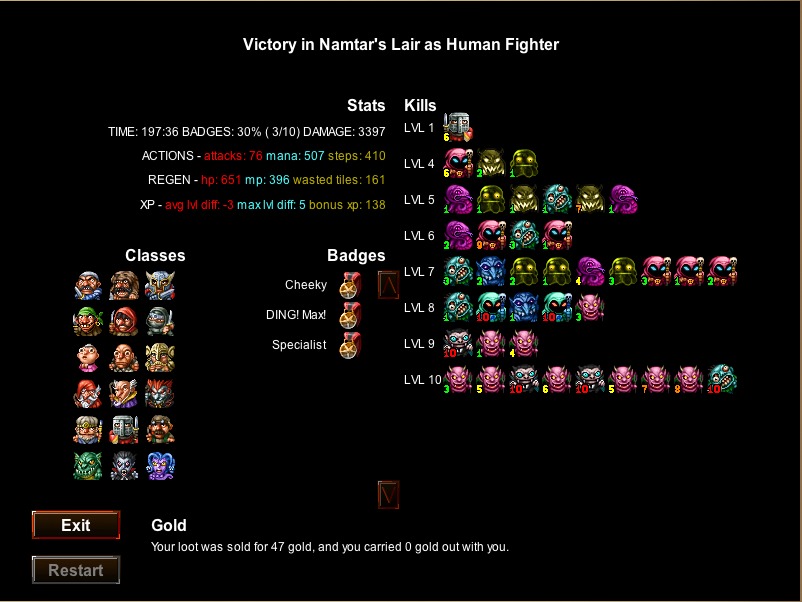 Here's my final screen. That's just incase you want to fill in the blanks of what I killed when and so forth. This was a tight run. If I had been able to convert into the Glowing Guardian or Dracul it would have been much easier, but you can't always be lucky.

One last note: If this is your first try in Namtar's Lair, try an easier class like the Berserker, who can skip the Binlor step, the Warlord or the Priest. The fighter is not actually a good pick for this dungeon.