Difference between revisions of "Alpha:Snake Pit" 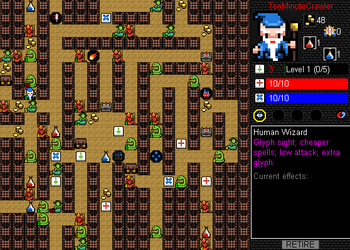 The Snake Pit is a side dungeon in Desktop Dungeons and, as the name suggests, is composed of serpent based creatures. It is initially locked at start but becomes available after completing the normal dungeon with any class.

The dungeon is composed of Serpents, Gorgons, and Nagas (the only dungeon this monster is found in). Like other challenge dungeons it contains two bosses instead of one, these are Jormungandr and Medusa.

The Snake Pit is the first Challenge Dungeon to be unlocked, but is not necessarily the easiest right away. Some characters will find it easier to defeat other dungeons. However, as you improve the quality of the shops, the Snake Pit will become remarkably easier for all characters.

The Snake Pit contains three types of monsters with unique properties. The Serpent gives poison, the Gorgon makes a first-strike death-gaze attack, and the Naga will weaken your character (permanent reduction of attack strength). Since these abilities only activate when attacking these monsters in hand-to-hand combat, spellcasters who rely heavily on BURNDAYRAZ will find this dungeon significantly easier. Targeting high-level Gorgons is your top-priority, as they have very low overall health and can be brought down with minimal use of mana.

As with Wraiths in the Crypt challenge, the Serpents will create a problem for melee-oriented characters, and are best engaged when the experience gain from killing them would cause a level-up. Otherwise, they are best avoided, especially since Gorgons generally make better targets anyway. Nagas are probably the least lucrative of all targets in all challenge dungeons, since the effect of their attack is permanent (it persists for the remainder of the dungeon!). Heavy spellcasters, or characters who can first-strike a naga in one hit, might be more inclined to take them on.

As mentioned earlier, this dungeon becomes much easier when higher-level shops (and extra shops) are unlocked by repeatedly completing the normal dungeon and the Library and Factory challenges with different classes. This is due to two extremely helpful items, the Viper Ward and Stone Sigil, which grant immunity from Poison and Death-Gaze respectively. Fortunately these items are not very high-level, with the Viper Ward having an item-level of 7 (complete the normal dungeon with two characters) and the Stone Sigil having an item-level of 16. The first item will enable all melee characters to engage Serpents without leveling up. The second item renders the Gorgons practically useless in melee combat, enabling even weaker characters to take on the high-level ones without fear. This is almost essential for one specific character type, the Monk, or any other character that relies on prolonged melee combat.

Other methods of evening the odds include increasing your attack damage, first-strike, or healing properties. These will ensure that your enemies' attacks do not get the chance to kill you. Coupling first-strike with high damage may allow you to engage Nagas effectively, although in general none but the spellcasters will want to get close to the Nagas at all until such time that they are required to set up midfight level-ups.

The bosses here present another interesting challenge, especially the Medusa. She will kill any character who engages her in melee combat with less than 100% health. Again, it makes spellcasters much more suitable for defeating this dungeon, especially if they can heal. Poisoning Medusa works well too. Jormungandr is less troublesome per-se, because you're unlikely to want to regenerate while or even after fighting him (he's best taken on second anyway). If you rely on regeneration, for instance thanks to APHEELSIK (Assassin or otherwise), make sure you're carrying plenty of health-potions or the Viper Ward. Still, your main challenge will be to take out Medusa.

There are no gods with particular aptitude in this dungeon, with the possible exception of Tikki Tooki's boons (Dodge and First Strike). However as mentioned earlier it will indeed become easier if you lean more toward spell-casting, as all monsters here rely on their melee combat abilities. HALPMEH is probably the most useful glyph you can find in this dungeon (assuming it is unlocked, or you are a Paladin), as it will clear up poison (making Serpents valid targets all the time) and return health to 100% when fighting Medusa. GETINDARE or natural first-strike abilities will also make this dungeon much easier, including those attained from shop items. And once again, the Viper Ward and Stone Sigil are indeed the most useful items you can acquire at a shop in the Snake Pit.

In addition to class unlocks, for every 2 classes that complete this dungeon an extra pile of gold will be spawned in the dungeons.