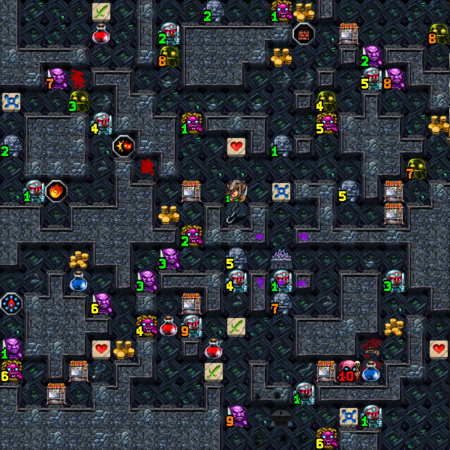 The MOAR! special dungeon is the

Berserker Gold challenge. The boss is Antimony, who uses the Warlock sprite but has 870 HP and 95% physical resistance.

This is a dungeon about overcoming the Berserker's limitations. No monsters with magic attack are available as easy targets for the magic-resistant Berserker, and most have a debuff or physical resistance.

Because the boss has a large health pool and high physical resistance, a large fireball-based damage spike will be needed to kill him. As a result, a gnome makes the best choice to tackle this dungeon. No preparations are available.

The Pactmaker's altar spawns somewhere on the level. These are the only two altars. A normal assortment of boosters, potions, gold, shops, and glyphs is available.

The monsters on this level are overall unfriendly to melee. The easiest monsters to kill are the Doom Armors, if you use the trick of fireballing them to remove a layer of death protection and immediately attacking another monster to ignite the Burning debuff and remove another layer. The Curse dealt by the Steel Golems is of little consequence, since your high magic resistance doesn't work on any of the monsters here anyway. Likewise, taking a few stacks of Weakness from the Succubi is no big deal, since you won't be able to melee the boss meaningfully. Feel free to use health potions for leverage, since health resources are worthless against the boss.

Mystera's altar always spawns near the altar. You should begin worship immediately and make sure to use every mana point available for piety, even if the spellcasting doesn't do you any other good. (If no glyph can be found after a modest amount of exploration, you might as well restart the dungeon.) Eventually you will want

Refreshment, and immediately before engaging the boss,

The item assortment is random, but if they are available, you should focus on items that improve your spellcasting ability. The

Battlemage Ring are all good finds.

Schadenfreude Potion without losing your Burning stack. Finally, the

Piercing Wand allows you to use whatever health resources you have to get in a couple of non-trivial hits.

The boss of this challenge is Antimony, who has a huge health pool and nearly-impenetrable physical resistance. You will need to cast many fireballs to take him down. A mid-fight level-up is of course valuable, but over the course of the fight the Burning stack will become significant and you can squeeze out dozens or even hundreds of points of damage if you don't lose it by attacking some other monster. Taking Pactmaker's

Consensus first if you need piety to fuel it.) Besides

Alchemist's Pact, you can use your potions, and hopefully you have saved some glyphs to use with Refreshment.