Difference between revisions of "Alpha:Library" 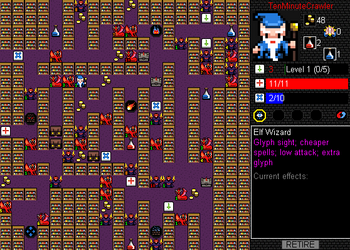 The Library is a side dungeon in Desktop Dungeons that contains monsters magical in nature. Although initially locked it can be made available by defeating the Normal dungeon with all Tier 1 classes.

The dungeon is composed of warlocks, dragonspawn, and imps (the only dungeon this monster is found in). Like other challenge dungeons it contains two bosses instead of one, the Matron of Flame and Aequitas, both must be defeated to complete it.

At first, the Library appears the be the blandest of all four challenge dungeons. Two of its monsters, the Warlock and Dragonspawn, are quite similar: both have no ability other than their attack counting as "magical", which is mostly a bother only for physically-resistant characters like the Paladin. The only real difference between these two monsters is their health-to-damage ratio, with Warlocks having higher attack damage but lower health, and Dragonspawn having more health but less attack damage.

This generally "tame" attitude of the Library means that different characters can put their own unique styles to good use, similarly to how they would behave in the "normal" dungeon. Some characters will need to adapt to the high damage handouts of these monsters, but overall their strategy should not change too much.

What does distinguish this dungeon greatly from the others is the third monster type, the Imp. These monsters are both fiendishly elusive, as well as a potential key to defeating the challenge. Imps will teleport themselves randomly around the map whenever they are hit; this includes melee attacks as well as fireballs. They can teleport to any free tile in the dungeon, including unexplored tiles. On the other hand, Imps have the lowest health amongst the three monster types in the Library, making them the most lucrative targets.

Characters that inflict damage over time, such as Monks and Assassins (and any character that relies on more than a fireball or two) will do well to ignore the Imps if possible. Any protracted battle is better handled against Dragonspawn, or even Warlocks if your health can be replenished or is high enough to sustain several attacks. On the other hand, characters with heavy melee strikes like the Berserker will find that the Imps, even high-level ones, can yield copious amounts of experience.

The randomization of Imp teleports also means that the more you explore, the better targets they become. They are more likely to teleport into known tiles (and hence be struck again immediately) if there are more explored tile on the map. This gives a certain edge to characters that tend to explore more than fight (again, like the Assassin, Thief, Tinker, or any other character who acquires and uses APHEELSIK). If your strategy relies on reserving tiles for later stages, you can probably ignore the imps until you need to set up midfight level-ups. Also note that if a particular Imp is blocking your path, you may strike it or fireball it to cause a teleport, hopefully to a less obstructive location.

Gods of particular interest in this level include Taurog and Dracul, both of whom have boons that increase magic resistance (useful against both magic-using monsters here). Naturally, Dracul would be the choice for spellcasters, while Taurog will assist melee characters. Avoid picking up these boons if your character already has Magic Resistance, as it will probably be lowered or not affected. This magic resistance will make the higher-level Warlocks a more manageable target, negating some of their powerful attack damage. Also, of course, it will reduce the damage intake from both bosses. In addition, Taurog will grant large amounts of piety for killing both Dragonspawn and Warlocks, so take this into consideration if your character is at all capable of giving up glyph-use.

Finally, look for the magical items Mage Helm and Mage Plate. There are no other items of particular interest to this dungeon (though naturally most items are still useful the same as in other dungeons).

The Half-dragon class can be unlocked by completing this dungeon with the Warlord. Any other class that clears the Library unlocks the orc race.

Shops will begin to stock more powerful items with every class that complete the Library challenge.