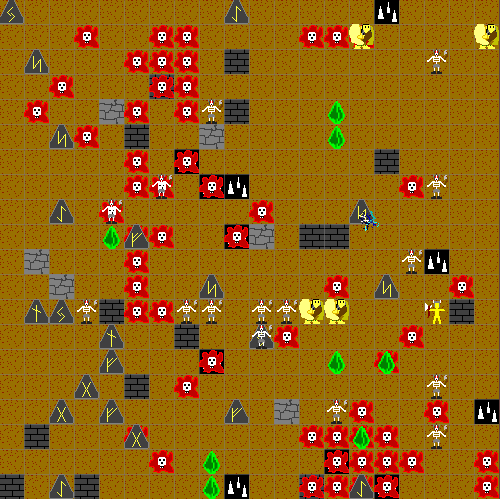 The mouse does pretty much everything, but you can also hit SPACEBAR to reroll a level.

THE THREE CORE IDEAS OF FIENDASH:

An awkward situation, aka. “Death by goat.”

FienDASH is a one-hit-kill game. Clicking on a monster in range will usually defeat it. Unfortunately, you’re bound by a similar set of constraints: you’re allowed to take only three hits from an enemy before you’re on your way to the Halls of Valhalla. If two or more enemies are in your immediate surroundings and you don’t have a spell or escape route ready, prepare to lose an irrecoverable portion of your life.

The game offers you numerous ways to funnel and block enemy encroachment, and learning how the AI moves and figuring out subtle exploits will go a long way towards helping you survive. 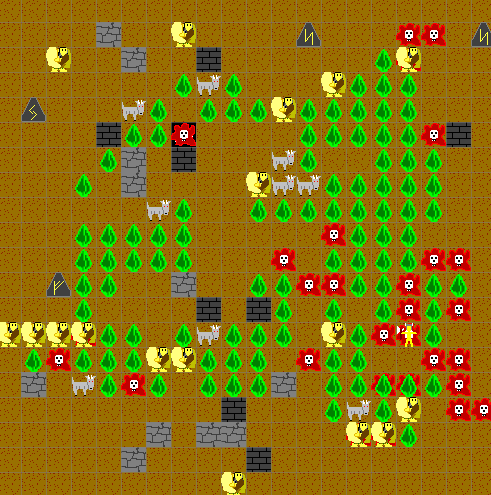 Players will soon understand how incredibly awkward this situation is.

After an initial breather period of 10 turns (during which you can prepare abilities or move into position) a steady army of monsters will start entering the play area. They spawn at a rate of 1 per turn, and using standard attacks you can theoretically kill them at a rate of 1 per turn as well. However, this isn’t realistically going to happen, and part of the game’s challenge involves making sure that you kill monsters quickly enough to avoid being overwhelmed.

Every game session consists of 10 waves spawning 20 monsters each. If you can survive past that, the spawn counter stops and it becomes easier to mop up remaining forces. 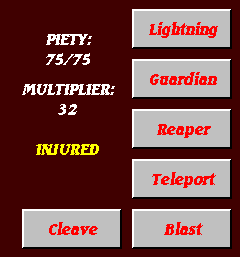 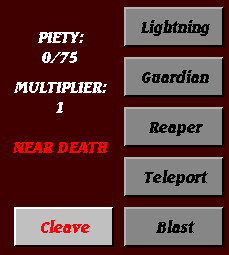 You will need to use god boons effectively if you want to survive a FienDASH session, and these boons are fuelled by piety. Generally speaking, you gain piety from killing monsters in melee combat: the amount of piety per kill is affected by your multiplier, and your multiplier is affected by how many kills you can string in an unbroken combo. Where possible, try position yourself so that you can kill monsters at a rate of one per turn without interruption: this will cause your multiplier to keep doubling until it reaches its maximum, offering you huge amounts of piety per turn and unlocking expensive spells much sooner.

Actions such as movement, idling, and most special abilities will interrupt the multiplier and set it back to 1. Always be aware of your multiplier and how your next action will affect it: this vigilance can mark the different between a glorious, bloody victory and a horrible, bloody defeat.

I don’t think that FienDASH is going to turn out to be very easy for anyone at first, and a lot of balancing still probably needs to take place, but there ARE a few characters who I consider to be more easily learned and managed than others. The Mystic’s CHANT ability is great if you don’t want to worry so much about boosting your multiplier. The Earth Ganner is another good option due to her ability to WALLWALK out of tight situations.

The religion system in this game works on an oddly inverted principle: picking the deity you want to champion offers no special bonuses except for ensuring that said deity will never turn on you! This is incredibly important, as every FienDASH session will involve at least one of the gods getting angry at you — removing one of your all-important abilities and determining what kind of enemy you’ll meet on Wave 10. Some characters are almost catastrophically useless when pitted against specific gods, so choosing the right champion can greatly reduce the likelihood of worst-case scenarios.

Hopefully this will help you get started. Good luck with negotiating the FienDASH prototype’s rough edges! Comments can be left here or at the Game.Dev forum thread.