What we learned at the GDC: Indies

It’s probably not possible to really convey the impact of coming to something like the GDC from the rather sparse game development environment of South Africa. We all had our eyes opened, our cherries popped, our minds blown and further variations on that theme. There was also a lot of handshaking. Then there was nerd-flu…

Here’s something we learned at the GDC:

You have no idea how awesome. Seriously. Every single indie dev we met over the course of the week was literally amazing. Being surrounded by people like us is something that we’re just not used to, but are definitely feeling the lack of right now.

Andy Schatz has to be the single most helpful, positive person in the entire universe. He’s this ball of enthusiasm and energy that radiates sheer, unadulterated glee. Not only is he one of the elite few who have finished DD’s Lothlorien challenge, but he wrote a three page guide to playing Desktop Dungeons for the other IGF judges after he worried they might think it’s a little too hard to really get into. How is that not totally kickass? 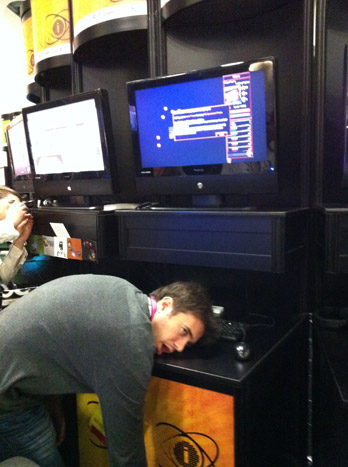 Andy was officially the first victim of the GDC version (and first victor too).

Alexander Bruce deserves special mention for being both an Australian and a gentleman. Also his surname is Bruce. BRUCE! We had great fun playing indie dev katamari with him in the evenings as we grew larger and larger groups that would randomly set off in search of dinner, conversation and the dodgier areas of town. 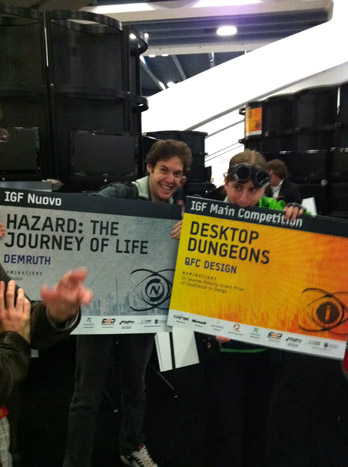 Meeting Daniel Cook after years of reading Lost Garden from afar, only to have him gush about how Desktop Dungeons is totally the right kind of hobby game and then immediately dive into serious UI discussions, counts as one of the highlights of the show. It also emphasises just how approachable people are at GDC/IGS sessions: We sort of just walked up to people after their talks and said hi.

Jason Kapalka came around to our stand multiple times just to spend hours with us, discussing the game and dropping gems of wisdom on how to optimise play experiences on iPhones. We realised that he actually talked about a lot more as well when he emailed us the bullet points a couple days later – just in case we didn’t remember. That’s awesome. Especially when there’s no chance you’re going to be able to take notes on a crowded convention floor. 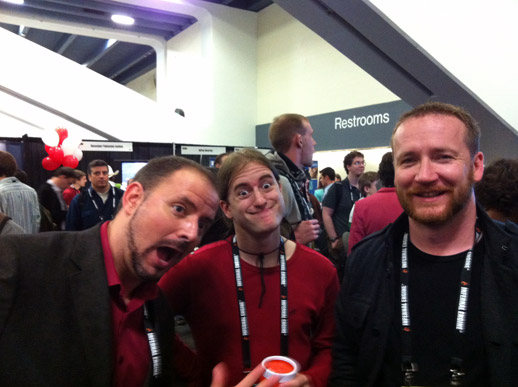 No, we don’t know why Rodain’s pulling that face…

We’d worked with Jane McGonigal long distance before… Sort of. Actually meeting her was yet another great personal milestone. Getting to the top of her building was a geographical milestone. The guided rooftop tour of San Francisco and extremely random Irish Tram Non-Ride after the awards ceremony on Wednesday, count among some of the coolest things we hope we remember correctly. Thanks guys! 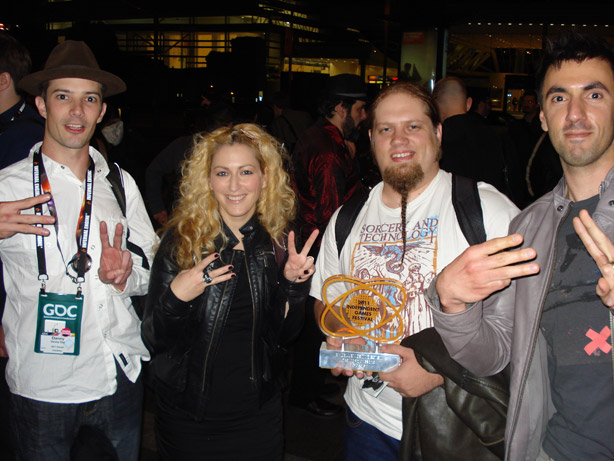 “So if you could work with anyone, who would you choose?” “Jane McGonigal!” – us to the World Bank Institute, early-EVOKE.

If you ever get the chance to hit the Winnitron with the guys from Vlambeer, have a dev-duel in Cobalt, discuss minimalism and molecular gastronomy with Scott Anderson, babble incoherent thanks at Derek Yu, be hypnotised by Robin Arnott‘s mesmeric jackets, swap graphic novel prefs with someone who just happens to have built 100 Rogues, stare longingly at Adam Saltsman or play “no your game stole more of my time” with Team Meat, don’t hesitate. It will be worth your while… Especially if you swallow your fanboy tendencies and take the chance to walk up to the guys from Introversion in a bar. 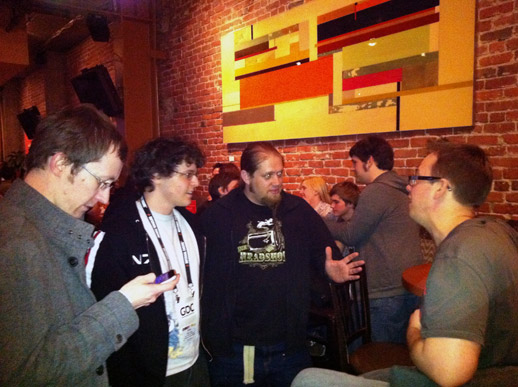 We promised Chris we wouldn’t post the pic of him in Rodain’s legendary goggles, so you get this one instead.

There’s something awesome about having your heroes made real and realising they’re entirely undimished by it. (Except for Derek. He’s shorter than we imagined.)


7 Responses to “What we learned at the GDC: Indies”