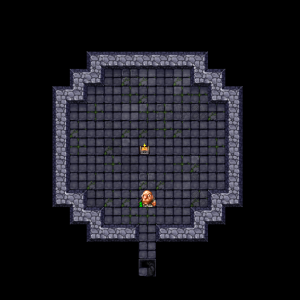 Read on for a more detailed description of our changes, along with a bunch of screenshots — just please excuse the repetitive graphics, we’ve only got one terrain tileset loaded up at the moment! 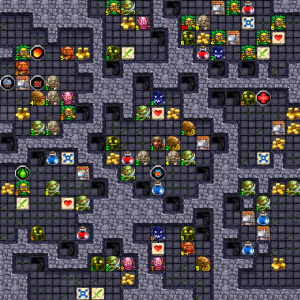 “Madness Isle”: if they don’t use magic, players will be forced to take risky expeditions down unknown stairways.

As has probably been noted in previous posts, the core layout of dungeons in Unity DD operates on a new set of parameters. Instead of the same basic algorithm generating every game experience you have (as it stands in the freeware version), we can load up and fire generators for just about every conceivable situation: mazes, islands, even multi-level towers or ant hives.

Even in standard roguelikes, the layout of a level can make an enormous difference — just ask any veteran. But in a game like Desktop Dungeons, it changes up the entire experience. Open desert levels afford flexible movement, but regeneration trickles away while you hunt down enemies that blink or run away. Claustrophic labyrinths create multiple chokepoints and dead-ends, pushing you towards teleportation magic or inconvenient enemies. Mines force you to burrow through walls to find new areas, while island hop maps ask players to make a leap of faith as they weave their way through numerous portals, never quite certain where they’ll emerge until they step through one. 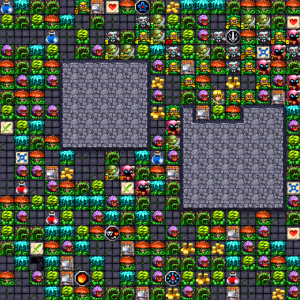 “The Swamp”: much less confusing when you actually go through it. Carving your way through the plants, however, will steadily weaken your character.

The number of foes in Unity DD has greatly increased, and there’s a much broader roster of enemy effects: some will transform into other creatures, some have abnormally fast regeneration (and can cloak themselves after combat!) while others specifically shut down magic users by retaliating against fireball damage.

Some enemies don’t even grant experience: they’re merely there to hinder progress (usually with some nasty effect like poison or mana burn) and players have to find a way around them or spend the necessary resources to deal with them. Other enemies will drop special items that have a marginal effect on the current situation, and it’ll be up to players to decide whether the reward is worth the trouble of killing them. 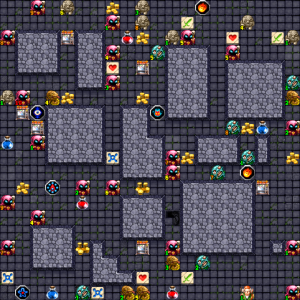 “Creeplight Ruins”: at first, this seems to be a simple, open map filled with easily-defeated cultists. But their deaths hold a terrible secret.

Unity DD will sport a lot of dungeons that hook into custom handlers. These handlers are used to produce special “script” events that occur only in specific dungeons, making it easier to give each challenge its own personality.

For example, one dungeon may feature rock golems emerging from the walls every time a character levels up. Another dungeon can spawn “guardian monsters” which weaken the boss when they’re killed. A third dungeon may not even REVEAL the boss until specific conditions are met. These are just a few of the possibilities, and the full extent of scripted behaviour will be left as a surprise for beta players. 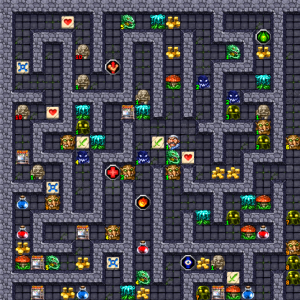 The ease with which we can create interesting dungeons allows us to create a range of challenges that immediately dwarfs the freeware offering. With the tutorial and beginner dungeons alone, we’ve already got about eight or nine unique scenarios for less experienced players to have fun with — and that says nothing of the dungeon range that we have planned for gamers of all levels.

Of course, we won’t just be using every single idea we come up with: that would be lazy and could fill the final product with half-baked ideas. However, we ARE spamming concepts for internal testing and analysis — this shotgun approach to dungeon creation hopefully means that we’ll be able to create a game with dozens of amazing challenges that have been cherry-picked from many more okay ones.

So not only will we have many more dungeons for you to play, but we actually hope that EVERY SINGLE ONE of them will be way better than any other DD experience you’ve had thus far.

We’re getting pretty excited at the worlds which are being built right now, and we hope you are too.