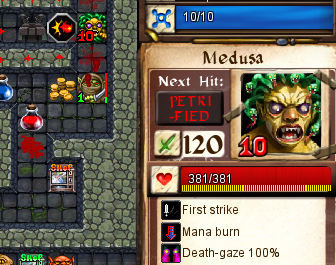 We’d been thinking about adding a Vicious Token into the game for a while now, a way for a player to choose to make every dungeons a real challenge. We knew our over-the-top tier players would eventually get bored with even the most vicious of dungeons. We also knew they would find everything leading up to those dungeons a breeze.

So in our usual way, we made the Vicious Token absolutely ridiculous.

Every enemy in Desktop Dungeons has two ‘toughness’ ratings: one for health, and one for damage. In a normal dungeon, those are both set to 1. In a hard dungeon, it’s around 1.2. In a vicious dungeon, it’s more like 1.6. So for the Vicious Token … we set both to 2.

In the weekend after release, there was much wailing and wringing of hands. This means it was probably a little too hard … but people were still managing a fair number of wins. There was a very real slant towards BURNDAYRAZ strategies, which suggested that the enemy health was beatable, but the damage was not survivable.

This week we’ve lowered the damage toughness for the vicious token, but left the health toughness the same. Hopefully this will let the vets stretch their “make every tactic work” muscles a little, while still giving them a real challenge.

Oh, and we took the Vicious Badge requirement out of the Perpetual Questing Initiative pool … that was just mean.