One of the really interesting parts of running a rather long beta is watching players interact with each other and with developers over time. After a while, something seems to happen whenever a particular kind of problem is perceived in the game: Everyone tries to design their way out of the issue.

That’s great, new ideas are never a bad thing, but often player input is tempered and mangled by what they perceive as the responses the developers are likely to take. That’s the Design Vocabulary that ends up informing the majority of conversation. Different games have different design vocabularies. Desktop Dungeons has a vocab that focuses heavily on the idea of balance, player skill progression and dungeon completion. Players tend to talk about specific classes or gods being over- or under-powered in specific situations and motivate for the tweaking of numbers accordingly.

Except oftentimes it’s not numbers that need to be tweaked and adhering to the design vocabulary that has so far governed the conversation is actually a bad thing! The classic example of this is the old saw of the players who complain that a certain gun in Random FPS Game is ineffective and useless, so they suggest new numbers for damage output, fire rate, etc. None of those values seem to make any difference and actually make the game less balanced as the gun cycles through being buffed and overused to nerfed and hated, until one of the designers simply changes the sound effect that plays when the gun fires and adds more bass. Suddenly everyone is happy with the gun at its original values and it turns out the balance was fine, everyone was just framing the discussion poorly due to a blind spot in the design vocabulary around the game.

I raise this concept because there’s a big change coming in how we as a design team approach issues in Desktop Dungeons. It’s been brewing for a while now, but we’re finally at a point where we feel that tweaking numbers and effects is essentially navel-gazing in an already well-balanced game experience. The new definitions we’d like to see making their way into the vocabulary of the discussion revolve around strange-sounding terms like information-load and richness of feedback. Essentially, we’re focusing on making the game easier for people to pick up over time because it conveys better and more useful information to them as they play it. We know the game CAN be played, we just want to make that play experience smoother. There’s no end of situations in DD that can benefit from more information: Everything from players learning about bonus experience or wasting regeneration space to the effectiveness of poison on enemies and their current debuff state can (and should!) be displayed graphically.

Interestingly, that kind of “at a glance” information is something that DD beta players have lacked up until now, so us changing to focus on that puts a lot of strain on their comfortable design vocabulary. Then there’s another concept that strains how our players talk to us about design:

The problem of skill estimation and slippery slope prevention: 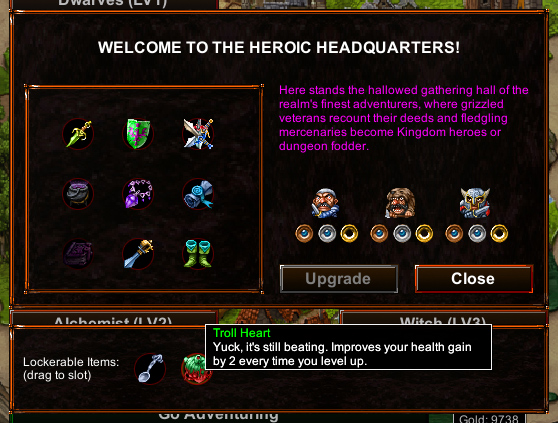 There’s been a lively thread on our forums about the in-game item locker functionality. The short version is that a core group of experienced veterans (players who have typically injected over 100 hours into DD so far) feel that they would like to be able to access every item in the game at a moment’s notice for their next run. Ideally, this would let them plan out strategies without having to go and find items in the game world.

This is a specific sort of slippery slope problem that Aequitas wrote about quite a while ago, but it’s made worse by the fact that us humans are pretty damn bad at estimating the difficulty of a task once we’ve internalised the skills needed to be proficient at it. Take driving, for instance: Once you’ve learned to drive, you no longer actively think about the complex co-ordinated actions you’re using every second, instead you think in the broader terms of driving like changing lanes, slowing down, making that turn, etc. The same thing happens in game development all the time when a developer shows off their game for the first time and discovers that new players can’t even get past the first obstacle, which the dev has made harder and harder as their skills have grown through familiarity.

As it stands, we’ve changed how the Adventuring Locker works quite a few times now: We’ve added more storage space; We’ve made items lost or destroyed in dungeon runs easily replaceable; We’ve even added a temporary backpack for items that you carried out in your last run but don’t want to “waste” a locker slot on. The design vocabulary around the locker is one of space. Players always talk about space and wanting more of it. Except the actual complaint is that they have items in their locker that they don’t want to replace. We’ve approached this problem in a couple of ways, most notably by making most items require a single dungeon run to re-discover (granted, you have to win that run) and by allowing players to tailor random item drops by saying which items they never want to have appear.

The problem is that players are never going to be happy with a limited locker space. Ever. It doesn’t matter that an infinite locker would essentially scare new players away with unnecessary complexity (compare DotA2’s hero selection to the limited roster of LoL, for instance) or that a “late-game” infinite locker wouldn’t solve the desire for more space either – it would just be wished for earlier and earlier. Hiding the “true” locker behind some incredibly difficult quest would end up not feeling fair… Seeing as this seems to be a situation that players are probably always going to be complaining about, no matter what particular phrases of the current design vocab we implement this week or the next, we have to make the hard choice to simply say no. No, the locker isn’t going to expand unless we see a way to prevent the same complaints from cropping up yet again once people have had a month to start taking the change for granted. Every single limitation or cost proposed for an infinite locker so far has this slippery slope weakness, so the only way to prevent sliding down it is to stand fast.

Personally, I think that losing carried items on death or conversion would solve the “can’t bear to replace existing items” conundrum quite nicely, but I’d have to motivate pretty hard to get the others to be OK with that change…