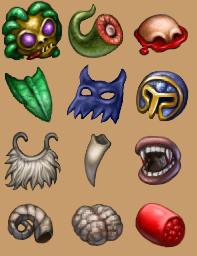 Hail, players! This week was another bug cycle (admittedly cleaning up most of the problems that were introduced by last week’s update). The good news is that we’ve also addressed some grey areas that previously weren’t favouring players, making them kinder and more accessible for players struggling in earlier parts of the game.

Tutorials should be operating properly again, and struggling players will note our attempts to soften the blow of death and make light of their defeats in a positive and occasionally poetic manner. People tearing their hair out towards the end-game will also be relieved to hear that you may now pick exactly which trophy you take out of a dungeon run — but choose wisely, because it’s still just a one-monster allowance!

This week’s blog image is a collection of the double-sized trophy graphics that were drawn up to make the trophy drop panel look a bit better, so you can ogle them at your leisure the next time you hit a dungeon. Changelog follows: