Difference between revisions of "Demonic Library" 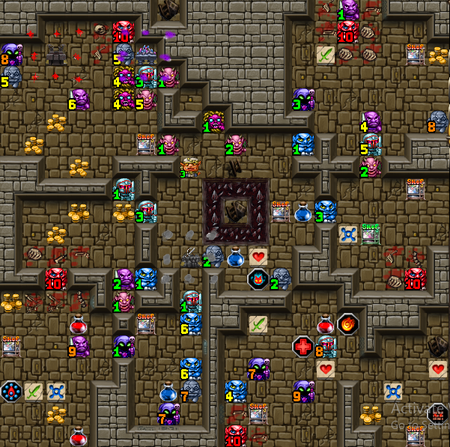 The arch-wizards of the old desert empire played with hellfire, and their entire civilisation suffered for it. Now malevolent beings seek to bring forth a world-destroying force.


Demonic Library is a Vicious-level dungeon located far to the North. It is unlocked by defeating Shifting Passages. The map consists of the main (library) part, as well as a special subdungeon hosting the boss of the dungeon (arena).

The boss is The Avatar (

Animated Armour icon, Attack 75, Health 954, Physical Resist 25%, Magical Resist 75%, Berserks 25%). However, in order to enter the Arena under the library where the Avatar resides, the five Demon Lords must normally be defeated:

Mesostel Ze: Attack 105, Health 222, Magical Attack, Retaliate: Fireball; found at the left side of the map

The Demon Lords each have identical stats, but different traits.

Defeating any Demonlord will give one layer of Death Protection to another one (chosen randomly). Defeating all five Demon Lords will remove all unbreakable walls from the map, thus unlocking the central entrance to the circular arena where the Avatar resides.

Striking the Avatar in melee or via BURNDAYRAZ produces several level 10 "???" enemies, with random palette swaps and abilities. PISORFing the Avatar does not produce ???s. ???s are not no-experience enemies, and easier ???s can be killed to level up if you need.

Because the Demon Lords have various traits, most strategies will find at least some of them more difficult to defeat. Generalist classes like the Thief or Tinker will benefit from their versatility; Paladins will have an easier time defeating the Avatar; Warlords have an easier time defeating the Demon Lords; and Bloodmages can tap into the blackspace of the Library Walls and fully benefit from the sizeable blackspace of the Arena itself.

In terms of races, because of the need to spike potentially multiple bosses, the potion races generally fare well. Orc does well because of the decent early-game damage boost that helps against the non-trivial monsters occupying the map.

Because each dying Demon Lord will give a layer of Death Protection to one of the remaining Demon Lords, leaving the most difficult lords for last might prove to be counter-productive. It is generally a good idea to start with one or two easier demon lord, but then take on the most difficult one after them, timing level-ups and using up some of the potions / other resources to defeat him.

It's a good start to kill a boss around L5-6. Take care of your exp bar and use level catapults properly. Generally, caster starting can spike Perivolcan Pa (top right corner) with level catapults and mana potions. The exp bonus is sizable, and it helps you level very fast.

Because you want to kill the Demon Lords at low level, regen-fight is generally out of the consideration and damage spike needs a level catapult and often consumes some more resources. An early

This alone makes Binlor a good diety to worship. Having knockback or PISORF will ensure you to move the Avatar next to the stairs, and positioning one ??? behind him will allow additional knockback damage. Binlor also poses a method for eroding the Avatar's 25% physical resistances.

According to an experiment, though it is actually possible to snipe The Avatar without defeating any Demon Lord, all Demon Lords should be defeated to win the dungeon.

Requires Enhanced Edition: The Moving of the Cheese - Complete Demonic Library with any 3 classes. Unlocks the playable