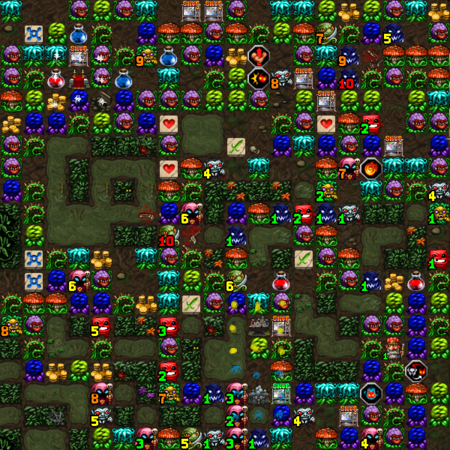 Ick Swamp is a Hard difficulty dungeon filled with plants and other dangerous monsters. It is unlocked by completing the Southern Swamp.

Monsters: Gorgons, Vampires, Warlocks, Naga, Meat Men, and Wraiths. Additionally, the dungeon is mostly filled with plants of all types, including barbing bushes. Monster difficulty is 120%.

Bosses: One random boss and Itsssama the Naga, with 318 hit points, 37 damage, 50% physical and magical resistance, and weakening blow.

You want to level up using gorgons, vampires, and sorcerers because they all have relatively low hp. Nagas are to be avoided unless they can be killed without incurring any weakening. The plants are very dangerous and hinder your movement, but avoid killing the poison and mana burn plants unless you're about to level up. If possible, before you level up, clear out all the poison and mana burn plants. Corrosion can not be removed easily, so it is recommended you avoid getting any. Before you begin the boss fight, make sure you have killed all sorcerers and pick up all wisp gems.

The boss, Itsssama, has very high resistances and weakens you, so a low damage character is not recommended. Additionally, you should decide in advance which boss to deal with first; if you rely mostly on physical damage and go after Itsssama first, you will want to pick up a

Fortitude Tonic for after the fight. If you decide to go the spell casting route, it is highly recommended you bring the piercing wand to counteract his high resistances. Isssama's weakness is his damage - even a level 6 rogue can take a hit without dying, so this makes HALPMEH an incredibly valuable glyph. Berserker and Rogue are very good class choices. If you choose a Rogue, you must either find HALPMEH, CYDSTEPP, or an altar to Taurog, because health potions will not last you long enough. If you find a CYDSTEPP glyph, start killing sorcerers, gorgons, and vampires 2-3 levels above you. If you find HALPMEH, it will be monsters 1-2 levels above you. If you find Taurog, only pick up the sword, armor, and possibly shield, as you need the rest of the space for wisp gems. If you go the Berserker route it's Taurog time! Grab the sword, armor, and helmet first converting all glyphs and killing high level sorcerers with your new 65% magic resistance. The boss should be easily outlast-able with any of the 4 tactics.

The harmful plants of the Ick! swamp can be exploited as a resource under limited conditions. A worshiper of Glowing Guardian equipped with HALPMEH can and should poison himself whenever he is at full mana and about to explore, and at any point in time during a battle where he intends to cast HALPMEH. Whenever practical, you should also try to get poisoned and manaburned just before leveling up. A character following this strategy will actually want to conserve the plants rather than just cut them down.

It may not look like it, but the harmful plants apply their effects by making a zero-damage attack. This attack can be dodged like any other attack. Rogues following Tikki Tooki can gain very large amounts of piety by harvesting the plants right before level up. Taking the Dodge boon makes this even better.

Killing a plant, even the harmless green ones, still counts as a kill and still discharges IMAWAL. Be cautious that you don't waste your bonus experience on a 0 xp kill!

There are 2 quests in ick swamp, Ick! and Way of the Open Fist (part 2). For completion of Ick! you gain 250 gold. All you have to do is beat the dungeon. Way of the Open Fist (part 2) requires you to beat the dungeon as a monk without preparations and grants you 350 gold. This requires quite a bit more luck than normal, as you must find an Altar to Taurog asap. Find Taurog and then convert all of the glyphs you've found so far for extra base damage and take the sword. Regen fight monsters (except naga) until you are level 8. Make sure you have extra tiles as you are going to need them. Start off with potions, then tiles until you can kill him in 3 shots (or 4 if you have 2 altars you can afford to desecrate), then use unstoppable furies for the kill. This will take many tires so try not to get frustrated.

Jehora Jeheyu is prep-worthy, even if the loss of an inventory slot hurts badly with all those Spoons and Wisp Gems. Chaos Avatar can be used to either wipe Weakness stacks or lower resistances before/after the fight with Itsssama, or mid-fight as a compromise with a nice level-up heal thrown in. However you choose to do it, you may as well kill all those nasty corrosive plants first and pick through the remains for any extra trinkets, if you have room for them.

Mystera Annur can also lower MR, and she can do the full 50% unlike Jehora given enough piety. One of the two gods or a God: Piercing Wand Piercing Wand is almost mandatory for using caster strategies on Itsssama.

Glowing Guardian has already been mentioned because of the extra piety available from poison/mana burn plants. This god also burdens your inventory, though.

Tikki Tooki has a novel interaction with plants to farm piety, discussed above.

The Earthmother is probably not worth it, all things considered, at best usable for a risky end-game spike. Against a low-damage tanky boss who applies Weakening is the last boss against which Vine Form is going to be of much help. Clearance, Greenblood, and Entanglement are somewhat better, but you will want to clear a large number of plants before converting in so that your Clearance will have a higher chance of removing the plants which are in your way. All things considered, Plantation is a risky move even then, except for maybe a Crusader, who will the fewest plants remaining thanks to his three immunities.

The others don't necessarily merit a special mention either way, though some specific strategies for Taurog are discussed above.