Difference between revisions of "Magma Mines" 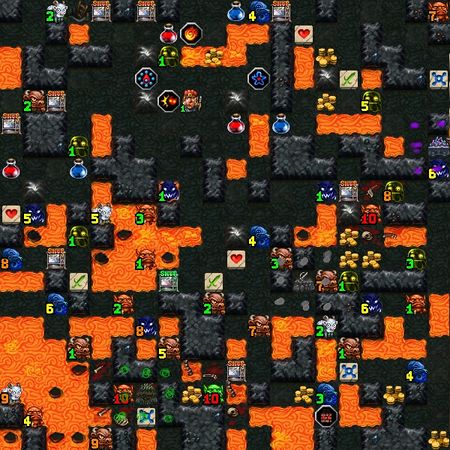 Goblins are always thinking of interesting new ways to make money. When mining for raw ore and sludge doesn't work out, they'll dig up and sell large quantities of lava instead. Nobody's really sure how that works.

Magma Mines is a Hard difficulty dungeon filled with goblins. It is unlocked by completing

Special Rules: Herp the Foreman has

Magic Immune until Hurr(physical immune) is defeated, and

Physical Immune until Durr(magic immune) is defeated. Once Hurr or Durr is dead, one another's health is reduced to 1. All three bosses must be killed. Although it is considerably easy to kill Herp the last, he can also be killed second. Cave snakes spawn young cave snakes.

In this dungeon, you are going to have to play a character that is specialized, but not so specialized that they cannot even throw a fireball. You will need considerable power to take down Durr, if you aren't a pure spellcaster, so you need to be able to tank a considerable amount of damage, or out regen the boss. If you are a

BURNDAYRAZ user, just get as much MP as you can as you will have to have to dish out 910 damage in fireballs between the bosses. After you kill a bodyguard, the other is reduced to 1 HP. If you are a spell caster this means you must have at least 105 HP or a

Death Protection. As a melee user, it means you will have to have saved 6 mana to cast

Paladin, you are going to want to combat mainly goblins and rock trolls. Long slug fights with cave snakes are dangerous, because you can be surrounded by young cave snakes.

Physical resist. When you combat Durr, make sure you have saved your subdungeon for regeneration between the bodyguards and the boss. Make sure you use your

Health Potions first, because you should save your mana to squeeze out the necessary

BURNDAYRAZ to kill the other bodyguard. Assuming you still have a few potions left, the boss shouldn't be too hard.

Taurog immediately, but don't forget not to convert

BURNDAYRAZ unless you prepared or happen to find

Whurrgarbl. You will probably be combating wraiths and goblins. Cave snake's poison will be devastating, rock trolls also have double regen, and goo blobs have physical resist. Remember to regen fight high level enemies, but still save tiles for the boss. Regen fight Durr, using potions and furies if truly necessary, until he dies. Immediately fireball Hurr, and convert

BURNDAYRAZ. Use your saved subdungeon to regenerate, and then beat Herp with your remaining resources.

Mystera Annur only if you bring a

Piercing Wand, and fireball higher level enemies. If you get a

Battlemage Ring, you should be able to regen fight, using

BLUDTUPOWA for a three-tile fireball, higher level enemies for minimal net damage. Once you are L8 or so, and you have a way of taking one 105 damage hit, fireball Hurr to death. Tank Durr's hit. Then, use your saved subdungeon to regenerate between bosses, then use blood pools, potions, and all your other resources to kill Herp.

There are two quests in the

Humility early. Remember to convert all potions. You will mostly be killing trolls and goblins, but Wraiths are great if you level up off it. Avoid Goo Blobs because of their resist, and cave snakes if you'll get trapped. As soon as you can take

Enlightenment, do so. Before you use

Absolution, spawn as many young cave snakes as possible, as they do grant extra max HP. Use

Protections to kill Durr, then Hurr with a fireball. Convert

BURNDAYRAZ and explore your subdungeon. Proceed to kill Herp with your remaining resources.

Schadenfreude Potion. Fireball Hurr down (his health is quite low) as soon as you'll be able to take a hit from Durr.