Difference between revisions of "The Labyrinth" 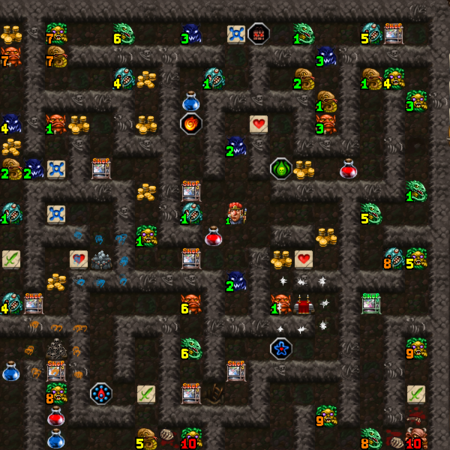 Many curious explorers wander into the ancient underground structure known only as The Labyrinth. Some return to tell stories of horrific bestial screams that echo through its corridors. Those who investigate further have a habit of not coming back.

This is one of the most twisted dungeons in the game, often barring further exploration with tough monsters. Generally speaking, the weakest monsters are near the center of the labyrinth and the stronger monsters in the outer-most portion. Since most strategies need to seek stronger foes early, this make it difficult to gain bonus XP. Worse, once you do start to encounter the stronger foes, you may have precious few tiles left to explore. Using Binlor's boons, ENDISWAL, PISORF, or any kind of knockback to punch holes in the Labyrinth walls can make this dungeon considerably easier to navigate and win. If you're not interested in using knockback, the

Titan Guitar is a fantastic locker preparation for this dungeon.

There are two bosses in the Labyrinth. One of them is chosen randomly, and the other is "Rex" the Minotaur. Once Rex has been discovered, he will chase you around the dungeon. Every time you kill a monster, he will appear next to you, potentially trapping you. Rex will never appear at a diagonal; he will always appear beside, above, or below you. Use this to position yourself to ensure a safe escape. If you do not discover Rex early enough, he will eventually come and seek you out after you've killed enough monsters.

Rex has relatively high attack damage, and he berserkers when his health gets low enough, pushing that damage even higher. However, his hit points are sub-par and he has no magic resistance. This makes him incredibly weak to a spellcaster. Anyone with the BLUDTUPOWA glyph and sufficient unexplored tiles can easily kill him just with hit-and-run BURNDAYRAZ attacks. The greater difficulty will be navigating the labyrinth to do so, and uncovering Rex early enough.

Rex starts following you either if you uncover him, or after exactly 20 kills, whichever happens first.

With the spellcasting power to turn Rex into a smoking crater, and a large "bank" of extra healing from his blood pools to deal with the other boss, the Bloodmage is a superb class for this level. Be sure to prepare the fireball magnet so that you begin with the BURNDAYRAZ glyph. Due to the nature of the labyrinth, you may have trouble finding it. Elf or Gnome make good choices for someone focusing on the spellcasting route, while Human and Orc work well for those who want to focus more on a hybrid.

Using his CYDSTEPP ability, the Warlord can continue to effectively fight with Rex even after he's gone berserk. This makes the Warlord a reliable melee-specialist class for taking on this dungeon. The Orc or Gnome races are recommended.

A good spellcasting class like the bloodmage, but somewhat less reliable due to the fact that he does not begin with the BLUDTUPOWA glyph. His glyph sense, however, allows him to quickly find other useful spells from within the dungeon. With good preparations, the wizard is a reliable pick.

As most of the monsters in this dungeon - including Rex - deal physical damage, the Paladin is a reliable class for The Labyrinth. Improving his resistances further via items or boons can make fighting the monsters in the dungeon easy. Consider prepping a god like Binlor or Dracul to this end (Binlor also guarantees PISORF / ENDISWAL to avoid getting stuck).

The only quest in The Labyrinth is Muu..., which requires one to defeat The Labyrinth with the Fighter, Berserker, and Warlord. Completing this quest will unlock Dragon Isle and give 500 gold. As noted above, the Warlord is well suited to this dungeon. The other two classes will take more extensive strategies and a good deal of luck to beat.