Difference between revisions of "Badge"

Badges are one dimension of dungeon completion. There are ten badges (plus one bonus badge) in Desktop Dungeons, each earned by completing the dungeon in a certain way. You must win the dungeon to earn badges; if you retire before defeating all the dungeon bosses you will never earn a badge. The first time you earn a particular badge in any dungeon, you will receive a small gold bonus. You cannot earn badges unless it's possible for you to fail the challenge; for example, if you haven't unlocked any gods yet, you won't get credit for

Faithless, and if you haven't unlocked the Bazaar, you can't get

Every single badge is attainable, although their difficulty may vary based on which dungeon you're playing and with which class. You will earn a small amount of gold when you first obtain a badge on a dungeon, and there are also several quests which can only be completed if your run is worthy of a particular badge (regardless of whether or not you have earned this badge before on the given dungeon). Apart from this, badges aren't worth anything except the personal pride of having overcome the dungeon with accolades.

If you're going for 100% completion in a dungeon, there is no reason to put any effort into getting

Faithless. Winning with a

Goblin Assassin can easily get

DING! Max! using his racial bonus, then use his

Unstoppable. This combo is also reliable for grabbing other badges. There are many deities that increase your level or grant bonus experience, which may be useful if you're having trouble reaching 10th level.

The Slime Pit or even physical immunity (

Magma Mines), which can make earning

Warmonger a challenge. One approach is to prepare the

Glowing Guardian and use his

Consecrated Strike to convert your attacks into magic damage. It can also be effective to play a

Half-Dragon to take advantage of their natural

Ironically, this badge becomes easier to earn on harder dungeons, which are often longer and feature more enemies. There are a handful of dungeons, such as

Naga City, where it is virtually impossible to win the dungeon without having earned this badge.

DING! Max! is hardest to earn on

Hobbler's Hold, where there are substantially fewer enemies. Using a deity who grants bonus experience or level increases, such as

Dracul is a good idea. If you want to go overkill, a combination such as

Goblin Fighter will make it much easier. If you reach L10 and then subsequently worship

Humility and end as a L9 character then you will still earn the badge. If you worship the

Glowing Guardian earlier and never reach L10 then you will not.

Most gods have end-game spike benefits which help in situations where you would otherwise desire potions, and these can play a crucial role. Altar preparations aren't really necessary to earn this achievement, but the option is there, and they are worth considering if you are using a specialized strategy.

Glowing Guardian is a great prep. By turning your potions into piety, you can get health and mana refills from your potions through GG as a middleman.

Health Potion conversions, but he might fit better into your overall strategy. You can get mana refills from

Tikki Tooki lets you turn your health potions into different potions which do not invalidate the achievement. Jehora Jeheyu also has ways of taking your useless potions off your hands, and you will want to be able to use

Chaos Avatar during the boss fight.

Taurog's death protections are great for glass cannon bosses, but are sorely lacking against tank bosses.

Binlor Ironshield would otherwise synergize with potions. He does well if you can regen-fight the boss, but he could easily come up short if the boss has poison, curse, or mana burn.

No conversion means no racial bonuses, and you must be very careful about picking up items. The

Wizard's ability to hold glyphs as small items is a huge advantage. If gold reserves are an issue for your kingdom, then playing as a

Goblin gives you an extra layer of security if you fail to earn this badge so you can at least win the dungeon.

Translocation Seal from the alchemist will allow you to steal from the shops. This does not count as a purchase, and allows you some leeway to get around this badge's requirement.

Glowing Guardian are options, as their inventory restrictions are less onerous when you are not using shops.

Tikki Tooki gives you a way to utilize gold. Another superb option is the

As you do not have any special items to get you off the ground, you will want a class with a strong early game and the ability to adapt to whatever items happen to be available. The

Thief can all play this role. With a more developed Kingdom, the

Tinker can also do well without preparations, as he is well-equipped to obtain the items he needs from shops. Another option is to simply reset the dungeon until you find something favorable - a nice glyph, item, or altar - near the dungeon entrance.

Most classes find it hard to abstain completely from glyph casting, but the

Rogue (with strong items) all have enough muscle to power through under the right circumstances.

Strength Potions are highly recommended, as you have no other use for mana. The two stand-out deities for

Cleansing to give you an option to deal magic damage. On dungeons where you're guaranteed to encounter physically-resistant bosses Glowing Guardian should be your default choice, although

Half-Dragon is a good alternative. The

Bear Mace is an excellent preparation, as it gives you some utility options that are not glyph related. It is a superb option for maze-like maps such as the

Really Big Sword is another option for beating through physically-resistant bosses, and works best on

Ick Swamp. In Ick Swamp, the boss has both physical and magical resistance so magical strikes are of no help. In Namtar's Lair, the physically-resistant form of Namtar is encountered in the underworld and you cannot use

Cleansing to beat him. The

Half-Dragon also struggles with Namtar's magically-resistant form, and if he cannot line up a knockback chain his run will be ended.

Vampire. Since he cannot worship deities at all he will always earn this badge. Otherwise good preparations to limit your need for deity boons are the best way to grab this badge.

On most dungeons this badge will be trivial to obtain, requiring only that you play a specialist spellcaster or specialist melee character. Avoid hybrids that rely on a combined arms approach of melee and magical assault. There are a few dungeons where this badge is much more difficult to obtain, such as those that feature multi-form bosses which use different resistances. Multiple forms of the same boss count as the same boss for the purpose of this badge, so you must beat them all with one type of damage.

This badge does not actually check the "type of damage", but instead checks "type of attack".

Although the damage from knockback attack is calculated as a physical attack, it is not counted. Thus

Half-Dragon's knockback attack will not invalidate the badge.

Binlor Ironshield can be useful for some situations, as

PISORF gives you a physical damage option from spellcasting and he also provides the option to erode resistances. This badge is often easiest to obtain with

Warmonger, since if you aren't using glyphs you're unlikely to have any source of magical damage. An attack imbued by the cleansing boon of the

Glowing Guardian counts as magical and not physical.

Obtaining this badge is more luck-based than skill-based. Will you encounter an appropriate L2 monster, or will your early exploration be blocked off? If you want to ensure you can grab this badge, preparing

Binlor Ironshield is a good idea. These gods offer glyphs that allow you to move monsters out of your way so you can avoid killing L1 opponents until you find a suitable L2 foe to take down.

The best way to obtain unstoppable is with the

Assassin due to swift hands, reaching level 10 will allow you to effortlessly execute every non-boss monster. For other classes, dealing with the level 8 and 9 monsters as early as possible (thus maximizing the bonus experience yield they give) is the best way to grab the Unstoppable badge.

11 badges in one run 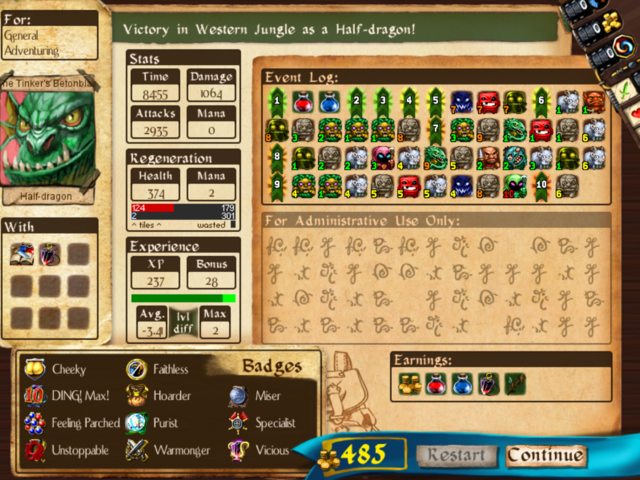