I’ve been thinking about this for a while, and it seems that compelling gameplay can usually be boiled down to a few base verbs. Collect is the first one that I thought of, so let’s start there.

Collect is a very simple concept: Get everything that you can, and keep getting better stuff when it’s available.

You can see this in most RPGs and MMOs. Gotta get that epic gear/fire sword. It’s also visible in things like FPSs. Find the next better weapon, find ammo for it, find an upgrade to it. Collect was used to make Crackdown incredibly addictive, to the point where just the sound of the collectable (orbs) can get fans riled up.

But collect has taken on an even subtler role. With the introduction of achievements on the 360, collect has become a meta-game. Now, even games with a low number of Collect actions, still allow you to Collect! The idea of achievements has spread through all of gameing now, and almost no new games are released without this Collect meta-game.

It seems that some gamers are more susceptible to the Collect frenzy than others.

Me, on The Verge, talking YouDunnit and the GGJ

I did a Skype interview a couple of weeks ago for The Verge, a gaming TV show here in SA. This particular episode had a segment about the Global Game Jam, so naturally I talked about YouDunnit and what goes into making a game in 48 hours. I apologise in advance for the chair-swinging (I honestly didn’t realise I was doing it Shoutout to the Blue Clan!) and I totally owe Pippa and Mo for making me sound half smart despite that. 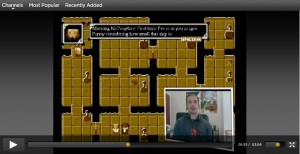 P.S. The last Vuzu clip disappeared after a month or so, be warned that this link might not work eventually.

DD is EDGE’s internet game of the month!

Our dreams of one day being just like Introversion are officially one step closer! UK supermag EDGE got hold of Desktop Dungeons and decided it was awesome enough to be their internet game of the month. They said (all the way down the bottom there)… 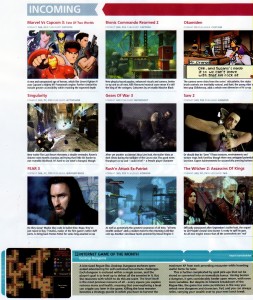 P.S. If the scan offends anyone, shout and we’ll pull it down. We’re just a little excited, that’s all.

Actually, neither app needs to meet the other at all. That’s the nice part about file-based versioning systems like Subversion: You can just lob them at a particular part of your drive and they just work. Most of the time.

Now that we’re starting to focus on building a Unity version of DD, we’re running into a few problems. Firstly, we’re a distributed team, so that means we NEED to have some sort of versioning in place. Frankly, even if we were always in the same office, versioning systems are so useful that there’s no excuse NOT to use one. Game Maker’s been great for prototyping the game so far, but it’s sorely limiting because having multiple people working on one GM project is tricky (and we’re pretty darn good at it). For instance, I built the interface as stand-alone as I could and I still needed to freeze the code for 4 days to merge it all into the version Nandrew was working on.

Anyway, back to Unity. This being the first time we’ve used the package, we’ve found out that it does some things that make it not play nice with versioning systems. Like continuously rewriting needed object metadata in a constantly changing set of random directories. Which is sort of a dick move when you think about it. Apparently the Pro license lets you force Unity to write that metadata as text next to the resources themselves, nixing the random rewriting/renaming and apparently letting SVN do its job as advertised.

We’ll probably switch up to the Pro version of Unity at some point over the next few months, but until then we really needed to get something working so that we could all start taking bites out of the todo list that’s growing alarmingly fast. There are a few posts out there about versioning and Unity, there’s even an official how-to if you’re using Pro. Unfortunately the consensus seems to be that versioning and free Unity is messy at best and non-functional at worst… END_OF_DOCUMENT_TOKEN_TO_BE_REPLACED

Progress on DD is picking up, now that we’re able to start on it full time properly:

Aequitas has been getting the basics going in Unity so that we can start moving development over to that for the full version. Those of  you that have issues with getting hemmed in by monsters at low level will have a new target for your ire soon, because he’s been messing with the random generation algs as well.

Nandrew’s been working on the religion system in the game and we’re busy testing how the changes impact both first-time players and veterans. It was clear that certain gods were just too powerful if worshipped early and that the incremental increase system was a little too open to runaway positive feedback. He’s also been resolutely squishing bugs and poking the Vampire with a stick in the hopes that it’ll be less broken when he’s done… 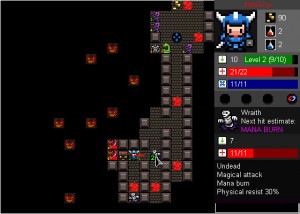 I’ve been messing with the game’s interface (because I tend to feel strongly about these things), trying to make it more streamlined and less “math heavy” for people to play. It took a while to write a modular interface overlay that I can change the look of in a hurry, but I’m getting to the point where the sorts of big, friendly health bars and damage taken/dealt indication are in the game.

One of the big things I’ve been focusing on is to remove the need for popups unless user-prompted and to re-use the bottom-right pane of the screen depending on current context.  So shops and altars tell you what’s on offer or who they belong to without a popup and you can choose to buy/worship without the game pausing… At least, that’s the theory. We’ll probably still have to have some sort of menu for the new religion system so that you can choose what to spend your piety on, but that’s still coming 😉