Don’t Be Nervous Talking To Girls …

… otherwise we’ll sic Jessica on you. And you don’t wanna get stuck in an everyday conversation with Jessica. 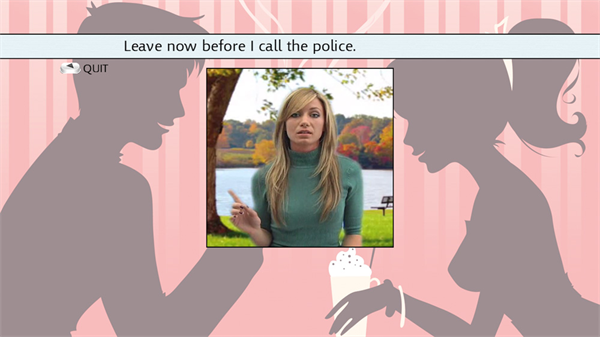 My terror of women has just increased that much more.

So yeah, another XBIG game I grabbed recently was Don’t Be Nervous Talking To Girls. Or rather, my so-called friends grabbed it for me because they thought it would be hilarious or something (hey, those were my 80MSP!). And yeah, I played it — but only so that I could ace it quickly in front of my buddies before jumping straight back to impressing real women and stuff.

I’ve never really understood the dating game thing, mainly because I think that canned interactions with a pre-defined AI are about as useful to one’s social skills as a therapy session with the local chat bot. And sure, Guitar Hero doesn’t let you rip the riffs just because you can steamroll Cherub Rock on medium, but at least it’s a fun process. Dating titles, on the other hand, seem to harvest hormones and desperation in place of cool game mechanics and meaningful experiences. I wouldn’t call myself a veteran of the genre (no, honest, I wouldn’t!), but most of the ones I’ve encountered (by pure chance or accident) are just a teensy bit rubbish (and didn’t star my kind of women anyway).

I’m not saying that the core premise of these titles is sexist (well I actually kinda am, though I’d strap a mountain of boobs onto Desktop Dungeons if my colleagues stopped erasing the damn code). But would it kill developers to make something that’s fun to play through regardless of the gratuities offered? There’s about a bajillionty-one games out there already flooding us with all sorts of sexploitive crap in between the good ol’ gameplay, but some of them are distinctly more fun than others. Sure, maybe half of Lara Croft’s fan base just want to stare at her ass for most of the game, but anybody who’s actually interested in the challenge at hand will probably be more focused on the tiger that’s trying to rip their throat out or something. Hell, I dunno, I never even bothered with Tomb Raider. 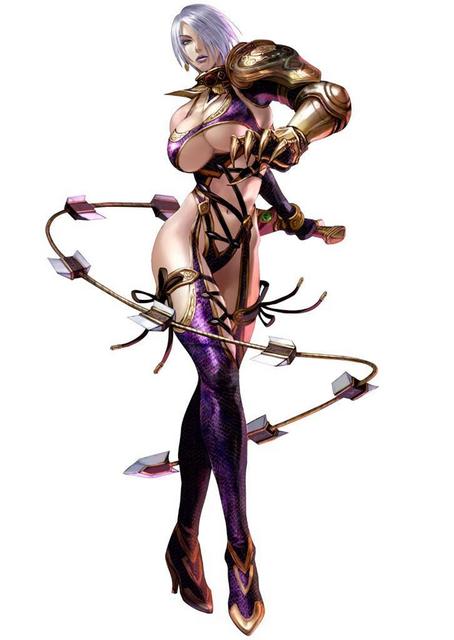 Why yes, she does have nice ankles.

One of the things that people tend to harp on with Desktop Dungeons is the unlock hierarchy. It’s nice to see that so many players — and reviewers — take note of this particular aspect of the game’s design, because we happen to think that it’s a damn good idea on our end. There’s rarely a better — or easier — way to increase a game’s lifespan. 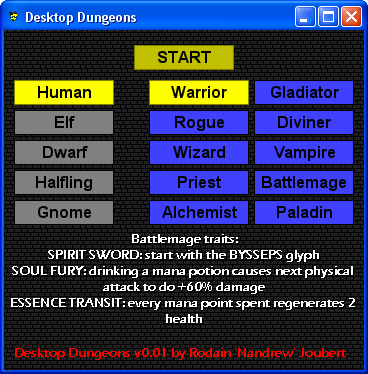 The grand total of option stuff from the first release.

However, I do want to point out that even before Desktop Dungeons became popular, a great deal of attention (and apparently some newbie-hatery, oops) started going into this game’s unlock system, since unlockables aren’t automatically cool or meaningful from the word go. While it’s true that they do pad out a game wonderfully, that’s pretty far from their core purpose (unless you count the opinions of those jaded devs who think it’s fun to award achievements for boring, grindy activities). The true benefit of unlockables — or at least, the one benefit which treats the player ethically — is the opportunity to shape early experiences and steadily “guide” people through the game without the help of some perpetual, canned tutorial. 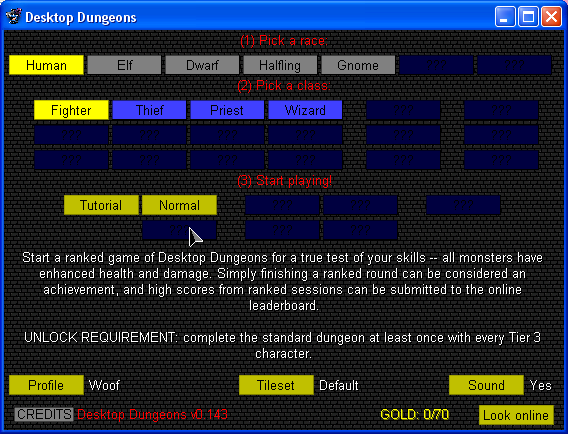 Lifespan! Also note how mightily I hate putting any work into menus!

Consider the vanilla Desktop Dungeons session: only four characters and a few races are available amidst a sea of otherwise locked features. The state of this initial setup is already quite significant: our starting classes are arguably the simplest to play and probably serve as the best introduction to the game. Fighters gain extra experience, enjoy some protection from death and are generally encouraged to hit stuff until it stops moving. Wizards are provided with blatant spellcasting bonuses and a helpful way to hunt down glyphs so that they can spam fireballs until the boss is a cripsy carnival treat.

In contrast, how many people would have hated the experience if we’d instead started them off with the Bloodmage, or even the oft-maligned (yet startlingly useful) Monk? Or worse still, asking them to play their first session as a perilously under-healthed Rogue, which veterans know well for their tendency to die after a single strike!

The pool of available enemies is also reduced for new players — there’s only five different monsters for beginners to worry about, and they’re completely robbed of the game’s nastier effects such as poison, mana burn and instant petrification. Elements are added appropriately as the player gets better and starts winning sessions — people who are comfortable with the warrior tree will be required to start fighting enemies with physical resistance, while those who unlock magey types will be required to deal with golems and the ever-terrifying dungeon goat.

In a situation where new players already tend to complain about Desktop Dungeons’ extreme difficulty, narrowing the ruleset is an absolute must so that gamers can get to grips with critical components first. Getting thrown into the deep end can be exciting, sure, but in today’s heavily saturated freeware arena it’s natural for Joe Player to need a little more convincing before investing time in some backwater, Roguelike-like project.

Hence the need to keep dungeons, characters and even items locked away until players successfully prove themselves ready to use them. It all seems to have worked out reason well: the unlocks provide a meaningful long-term goal for players to aspire towards and usually reward dedicated players with a more complex and rewarding game experience rather than just an “easier” one.

Given the positive feedback that the system has received so far, we’re looking at enhancing and guiding it a little further in the upcoming commercial version, tying player progress in with a more logical, story-oriented structure and a campaign which involves building up a “kingdom” to supply and amplify your hero arsenal. We want to do this in a way that is fun (and way more accessible!) without distracting people too heavily from the core game.

Plus, it would be great to have a campaign storyline that isn’t just a bit of flavour text before you go about defeating evil goats. 😉 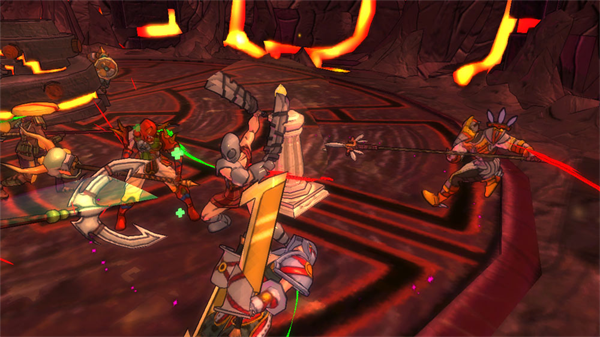 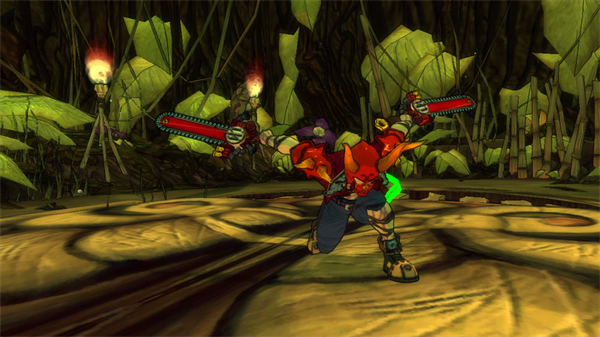 I’m not sure if it’s a ‘South Africa’ thing, or just a ‘Gaming Group’ thing, but there seems to be a bubble around the multiplayer aspect of a new game. The bubble is fragile, and can be burst by a number of things … and as with real bubbles, the longer it goes on, the higher the chances it will burst.

Now I know that there’s generally a large community playing a game even after my particular friend group has abandoned it, and even though some of my friend group will still be playing it, it’s not the entire-game-list-consuming multi-fest that it is during that first bubble. I must also admit that few things give me as much joy as playing a game and having the entire lobby filled with my friends.

Now there are a few things that seem to be able to burst the bubble. END_OF_DOCUMENT_TOKEN_TO_BE_REPLACED 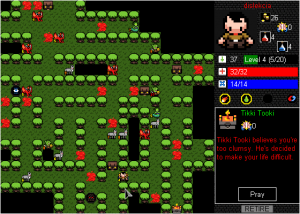 This is the part that nobody writes home about.

I just looked at the website (due to the scary amount of traffic we’ve been getting recently – mostly thanks to a mention from Team Meat, who have totally owned the SMM, obviously) and had a minor crisis. This isn’t what the mouthpiece of an interesting indie dev should look like! It’s all boring and stuff! Where are the entertaining screeds about beards or the witty Youtube videos of us being ironic?