Do I want to pick this up?

We’ve all been there. You see something shiny on the dungeon floor, you trot on over, and then you have to decide whether it’s worth taking up your oh-so-limited inventory space. Up until now, that’s been a slow process of: switching to your inventory, hovering over the tiny little ‘i’, and then switching back to the pick up panel … all very tedious. NO MORE! 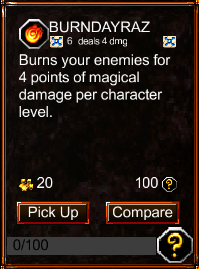 So much juicy information!

END_OF_DOCUMENT_TOKEN_TO_BE_REPLACED

Finally, altars that can be identified at a glance!

The Pactmaker has always been a point of interest among the gods. His/her (its?) boons are extremely powerful, universally applicable and pretty much game-deciding in just about any dungeon. Most veterans in the Desktop Dungeons alpha will go Pactmaker or go bust, leaving other gods as situational carriers or consolation prizes.

As with any overpowered game element, the Pactmaker is acknowledged as being a little too potent but is nonetheless quite well loved, so we knew that simply weakening him/her/it would leave a sour taste in many people’s mouths (and maybe some sternly-worded condemnations on our forums!).

Instead, we changed the god completely, giving it a playstyle that is boldly unique within the DD pantheon. Here’s how we did it: END_OF_DOCUMENT_TOKEN_TO_BE_REPLACED

As any game coder will tell you, saving and loading are horrible things. They make your life miserable, and people only notice them if they fail spectacularly. So I’ve snuck onto the blog to get some appreciation for my toil, and also give you a little “behind the scenes” idea of what’s going on when DD saves/loads. END_OF_DOCUMENT_TOKEN_TO_BE_REPLACED

As the team working on Desktop Dungeons expands (more on that later, oh so much more) we’re starting to get up to speed on the content side of the game. But you don’t need to take my word for it, I submit as evidence the new ice cave tileset that we’re working on: 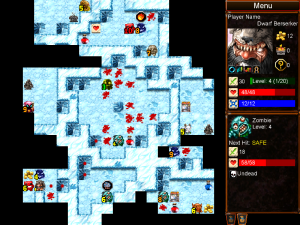 Yes, we’ve broken tradition with this, the ice isn’t in the north (as is so often the case) but actually to the east of the map. Perhaps there’s a reason for that?

Of course, this is all part of the lead up to the beta going online. We haven’t lost sight of that in the slightest, in fact there are tons of less visible changes happening in the game, but I’ll let Aeq talk about those later. 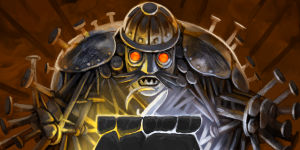 If I was required to mention one aspect of Desktop Dungeons that has been changed the most over its lifespan, I’d probably point to the religion system. God appeasement in DD has evolved from one-shot microquesting and stackable blessings to a more complex system of boons, piety levels and behaviour conditions — for better AND worse.

While we like the general approach as it stands now, there’s been a few harmful behaviours that the system encourages, and we’re working to get rid of them. We’re also adding a few new religious behaviours which give advanced players something new to consider and — hopefully — take advantage of. Details below! END_OF_DOCUMENT_TOKEN_TO_BE_REPLACED