Although the reliable ol’ dungeon remains a good standard unit of adventuring throughout Desktop Dungeons, we’ve recently been putting some more work into other classifications such as puzzles, subdungeons and regions.

Puzzles have been discussed recently, and subdungeons have been mentioned here and there (one or two simple ones were included with the E3 demo), but I don’t think we’ve mentioned regions yet. So here’s a little bit about ’em. END_OF_DOCUMENT_TOKEN_TO_BE_REPLACED

My my, how puzzling … 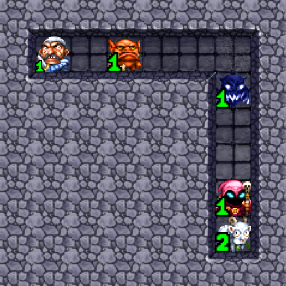 A fiendish mindtrap disguised as a simple situation.

I don’t quite remember when we first decided to add puzzles to DD, but I DO know that they became an absolute necessity after seeing how well they worked in Clash of Heroes. Kicking back and working through some creative challenges in a small, fixed environments is a real breath of fresh air, and they’re quite fun to design, too. END_OF_DOCUMENT_TOKEN_TO_BE_REPLACED

Pixels are sexy … but also sadists

After struggling with a weird rendering problem at the bottom of buttons, I figured out that moving the entire camera 1/3rd of a pixel down fixed the issue. Not gonna complain … just gonna look at 3D engine and go “It’s ok … i know you aren’t built for 2D”.

Finally figured out why the ‘pixel perfect’ rendering was making some very weird lines appear in textures … they were being stretched/shrunk, and the point filter does not stretch/shrink well. This means once we redo some textures, we can give people a choice between ‘smooth’ filtered mode, and ‘pixely’ unfiltered mode.

Many people complained about hotkeys during the E3 demo, so I took the day to get them in and working. There are now hotkeys for your two favorite potions (H for health and M for mana), and any inventory item that is useable is hotkeyed to the particular inventory slot that it’s in (1-6 top to bottom). And if you’re unsure, the tooltip for the item will tell you it’s hotkey.

It’s been pointed out that we should probably be a little more verbose with our development updates, so in the spirit of regular content, here’s what I managed to get done today inbetween mindlessly refreshing our sales info, avoiding writing up my E3 trip and reading the forum: 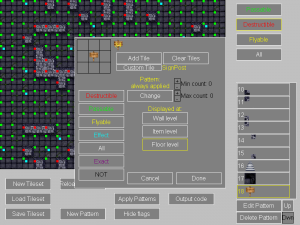 The hideous monstrosity above is our in-house Tileset editor. It allows us to turn a single texture into the detailed map backgrounds to your dungeon runs and is probably needlessly complex. We’ve been wanting to add the ability for tilesets to contain custom graphics for specific in-game objects for a while now. The obvious win being that we could do cool stuff like have signposts with snow all over them in an ice tileset, or tailor the dungeon stairs in every dungeon so that they don’t stick out quite as much as they do now, etc.

So with only a few game-breaking changes, tilesets now support the ability to override almost any ingame object’s graphics, provided we’ve allowed for that in the script. I might want to extend that even further to allow for the equivalent of map-specific monsters, but that’s probably not going to be terribly efficient: It would just be a better idea to add those monsters to the standard monster spritesheets and be done with it. 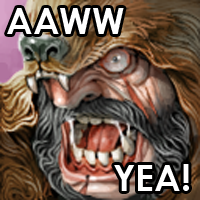 We’ll keep this brief. You have 3 days to play as much Desktop Dungeons as you can. It’s our brand new E3 demo build, and you can get to it by hitting that big ‘Play!’ button in the top left of the Desktop Dungeons site. The demo runs directly in your browser, using the Unity web player. Enjoy! 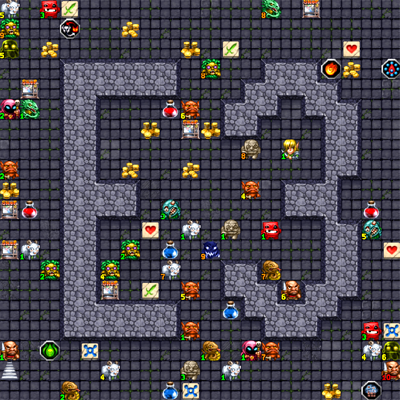 Only part of the QCF team is able to make it to E3 this year, so we figure there’s a good chance that not all of the DD community will make it there either. This situation is vastly unfair … so we’ve gotta do something about it.

After throwing out some magnificently expensive and incredibly impractical ideas (a duplicate E3 show in every major city), we decided to simply let you all play the same demo that we’ll be showing at E3! It’ll only be available for the 3 days of the Expo, so make sure you get to try it while it’s up at the Desktop Dungeons site!

The demo will show a partially upgraded kingdom (without the final graphics) and offers no progression — it’s designed specifically for the quick E3 showfloor turnover, sorry! But if you know anyone who’d love to get some playtime with the new improved DD, or just wants a little piece of E3 at home, point them at us this week. 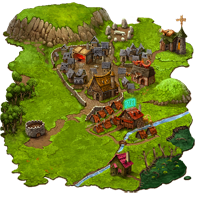 Today we’re finally ready to launch the new Desktop Dungeons site. We’ve got a ton of announcements, so here goes:

Firstly: You can now pre-order the full version of Desktop Dungeons for PC and Mac! Every pre-order will gain access to the upcoming beta as soon as it goes live.

Secondly: To celebrate pre-orders going live, we’ve got new versions of the Desktop Dungeons freeware for everyone. Not too many changes, just some bug-fixes, general cleanup and some interface changes. Oh! And a new class! And a new dungeon! Enjoy. Yes, your existing saves will carry over just fine.

We’re really excited about the next few months, there’s a lot going on. Oh, be sure to come say hi if you’re going to be at E3!