I had a bit of time earlier this week to stop working on the Unity version of DD and go back to the freeware version for some quick changes (get!). Aside from a few god balancing thingies that immediately came to mind, I also added a new Gauntlet mode that’s hopefully going to scale well for veterans and super-veterans alike (yep, “super-veterans” is now a term). There’s also some tweaks in other game areas which may or may not help with balancing here and there.

From an artistic point of view, I’ve also added the ability for people to craft individual sprites for every character class. The basic sprite additions that I’ve personally thrown in are still cheap colour-blending hackjobs at the moment, but at least it’ll give the artists out there a chance to throw in something that they’ve been nagging me about for some time. 😉 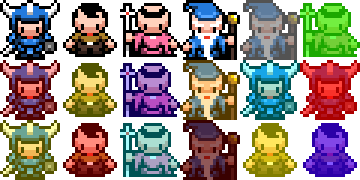 The new version won’t break old tileset contributions, but if you check the “default” folder you’ll notice a few new HeroXXXX.png files which can be replaced with something cool-looking in your own tilesets (the cheap-ass colour blended chars here are just for placeholding purposes, honest!). Have fun designing the new classes — unfortunately, we can’t spend too much time on the GM version at the moment with our commercial work looming and all, but we’re still taking feedback into account when designing the new system, so comments and e-mails are appreciated.

Hope y’all have fun with the changes made, however slight they are. We’ll do our best to make the final Unity product worth the wait!

(Oh, and don’t forget to regularly check in at this TIGSource forum thread for more tilesets as artists create them. The stuff over there is pretty durn rad).

Edit: We’ve silently updated the game to squash a couple of bugs that snuck their way in during testing. The Warlord now spawns with the correct glyph and the Gorgon class once again petrifies instead of killing normally.