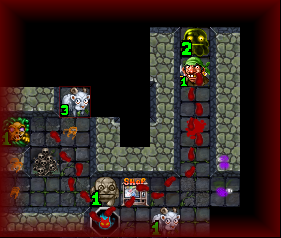 There seems to be a recurring issue with new and old players alike: Dying. For the most part, we don’t want to remove the threat of a gory, unnecessary death from Desktop Dungeons. We think that without it, newcomers’ interactions with the game will devolve into a spiral of ‘test-attacking’ everything until they’re completely out of resources. At this point, the game becomes *very* boring, and the urge to ‘try again’ is lost.

At the same time, we don’t want you to click on an enemy and become a mutilated husk of used-to-be-adventurer! We want you to win! We want you to beat that dungeon by the skin of your teeth and walk out, monster trophy held high! We want you to mouse over that over-muscled goat, and know, without a shadow of doubt, that clicking on it will lead to an incredibly grizzly, highly pixelated death.

Up until now, the only indication of this has been a depleted health bar prediction and the word ‘dead’ in red letters on the enemy panel. Clearly, not everyone is looking at that 5% of the screen at crucial moments, so we’ve taken it one step further: We’ve added a pulsing red border at the edge of the screen that appears as you mouse over an enemy that will kill you. Hopefully, this will make it much more obvious that clicking on that level 8, when you are a measly level 2, will see you splattered all over the dungeon floor. Soon we’ll look at adding a sound at the same time.